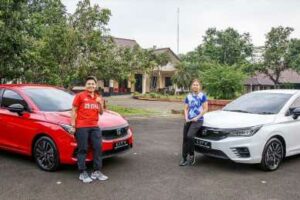 Indonesian Olympians Greysia Polii and Apriyani Rahayu have been showered with gifts and rupiah after clinching gold in Tokyo 2020.

By beating China’s Chen Qingchen and Jia Yifan in straight sets earlier this month, the badminton women’s doubles pair took home the republic’s eighth ever Olympic gold medal (all from badminton, if you’re wondering), headlining the country’s haul of five medals (1x gold, 1x silver, 3x bronze) from the delayed games. It was a good final, and in the end, Greysia and Apriyani prevailed, leaving the Musashino Forest Sports Plaza unbeaten in five games.

The pair are set to receive a Rp 5 miliar bonus (that’s five billion rupiah, equivalent to RM294,121) from the government as reward, and private companies have tripped over themselves to shower the gold medallists with money. But the biggest prize, literally, is the Honda City Hatchback RS that they’ve each received from Honda Prospect Motor (HPM). One in red, one in white – perfect match with the Indonesian flag.

“Honda believes that the power of dreams can push us to the highest performance. In the moment that Indonesia is celebrating its independence, this is a sign of appreciation and thanks from Honda to the nation’s warriors,” Honda said, adding that hopes that this appreciation will raise the spirit and performance of Indonesia’s athletes as they make the nation proud.

HPM said that it chose the City Hatchback RS as the model matches the spirit of the athletes with its sporty character. Launched there in March, the City Hatchback replaces the third-generation Jazz in the market, and is available in a sole trim level, the RS. The 1.5 litre DOHC i-VTEC NA engine with 121 PS/145 Nm can be paired to either a CVT or a five-speed manual gearbox. See more of the City Hatch here.

Missing the Olympics already? Paris 2024 is just three years away, and this time, we’ll get to hear Negaraku being played on the world stage, I’m sure!