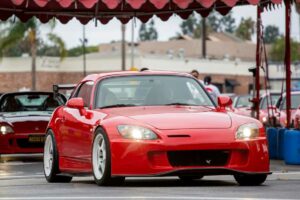 About 11 years ago, as I was settling into my role as editor-in-chief of Honda Tuning Magazine, I received an invite to the S2000 Homecoming event hosted by Honda at its Torrance, California, headquarters. A sophomore event, it followed up the original get-together which took place 2 years prior. With fans buzzing from those two events and effectively clamoring for more, a third Homecoming would take place in 2015.

There was really no guarantee for a 4th event, but throwing a party for the S2000’s 20th anniversary last year seemed like a perfect fit for this series and prior to the arrival of Covid, that was in the works. With an uncertain outlook so early in the pandemic, the idea was shelved, and the event postponed until September of this year. As you might imagine, managing expectations, heeding public safety protocols, and the brutal logistics involved in ushering over 500 cars into a highly secured corporate campus can be a handful, and that’s where Mike T. comes into play.

Having hosted hundreds of Honda-related events locally and globally, Mike is well versed in what it takes to throw a successful gathering. He assisted Honda with the very first event and has been the go-to guy for the trio of Homecoming events that followed. “To those who know me, anything less than perfection is a failure. Every step is calculated and every action has a reason. For those who are new to my events, I firmly believe a successful event is not dictated by the numbers of faces or vehicles, but instead, as Soichiro Honda puts it, ‘how many times your soul has been deeply stirred.’ The pinnacle of success is how many memories and smiles you provoked.”

Quiet Before The Storm

Mike and I met up for coffee 2 weeks prior to the event to go over the day’s happenings, what to expect, as well as finally meeting face to face. Energetic, confident, and ultra-organized, it was obvious he was incredibly well-prepared for the big day. With all of the headaches, stress, and emotions that come with putting together an event of this magnitude, I was curious what kept him interested in taking on the challenge, especially through rather tumultuous times, to which he stated, “Honda Homecoming is an event where I can let my childhood imagination run wild. I compete with my inner-self and challenge myself to see how far I can take this event to the next level.  When you love what you do, and people see it, the potentials and resources became abundant. While most sequels lose popularity, Honda Homecoming becomes a bigger and bigger phenomenon each time.”

The coffee shop we met at is just a few blocks from my home and not far from Mike’s, as well. That same parking lot would serve as a meet up point for the Orange County leg of the caravan headed to Honda’s Torrance HQ. I passed through the lot at 6am on Saturday morning on my way to Honda and it was packed with cars and enthusiasts who are checking in and meeting with one another in the early morning darkness. As 7 a.m. neared, team leaders were instructed to lead their specified groups, separated by model and color, on the 50-mile drive to Torrance.

In the weeks leading up to Homecoming, Mike worked with his hand-picked team leaders to cover every possible scenario and establish proper procedures but as any event organizer will tell you, there are always unforeseen variables that make their way into the mix. Even with that reality, the roll-in through the facility gates went smooth, with car owners checked in swiftly and ushered to their respective parking lot sectors. With vendors having arrived as early as 5 a.m. to set up, there were no obstacles to contend with and plenty of staff to help guide everyone into place.

It was a spectacle, no doubt—witnessing dozens of Honda’s celebrated roadster in single file formation streaming into the Honda campus. Though I didn’t drive my S2000 to this particular Homecoming, I brought it out to the 2010 edition and can tell you that a large group of identically colored cars, many of which are modified, draws as much attention as you might imagine.

Unlike your average local meet, there were no burnouts, valve-floating neutral revs, or even the vexing 2-step backfires that have become almost commonplace. Instead, car owners were mature and composed, taking direction and helping facilitate an eerily smooth entrance.

If you’re wondering why this year’s Homecoming, and ones that preceded it weren’t broadcast prior to the event happening, well, that’s by design. It’s not open to the general public, you have to reserve a spot and purchase a ticket/s, and those in attendance have a vested interest in the car’s being catered to, rather than a free-for-all that often brings in additional issues.

As expected, Honda’s headquarters carries considerable security throughout, so there was absolutely no risk of outsiders sneaking in and, more importantly, no risk of any vehicles on hand being snuck out.

In addition to the S2000, the NSX was also invited to the party this year.

Both models have pulled double duty over the years, serving both as aspirational for the Honda enthusiast crowd, and as long-standing performance pillars for the Honda/Acura brand. The NSX, however,  is one of the few Hondas to get the nod from the anti-import automotive front.

A handful of modern NSX made an appearance but the majority were based in the 90s. Like many cars from that era, prices have soared and those that already have one, aren’t soon to let them go. And while some cringe at the thought of putting any miles on their investment, others relish in an excuse to get back on the road and enjoy a piece of Honda history in real time, from behind the wheel.

The front wheel drive flagship portion of the Honda equation came from the Type R. To help celebrate the 20 and 30-year anniversary of the S2K and NSX, the rebirth of the “R” nameplate seemed entirely fitting.

Honda’s decision to offer the first ever Civic Type R in the U.S. based on the wildly popular 10th gen. chassis was indeed a smart move. The FK8 fought through some negative commentary early on based on its aggressive appearance but established a stronghold on the aftermarket with a legion of loyal fans.

Today, the aftermarket support is massive, with new parts showing up regularly, and we’ve even seen some iconic wheels make a return in order to suit the larger frame of the modern-day CTR. In fact, the 2021 Homecoming event offered a sneak peek at an upcoming release of Mugen’s legendary MF10 in 18-in sizing—seen here fitted to organizer Mike T’s Civic Type R.

Along with the addition of the Civic Type R, the Acura Integra Type R was also invited.

The 3rd generation Integra Type R could be the poster child for the law of supply and demand. The most remarkable part about the pricing for these gems increasing so much, so rapidly, is the fact that there’s no visible ceiling. As the years continue to accumulate and the number of pristine examples dwindle, expect the asking prices to continue a meteoric ascent.

To officially kick off the event, attendees lined a section of the parking lot to view the parade of special guests and vendor demo vehicles, like this Civic Type R from legendary tuning outfit, Jackson Racing. If you don’t know about Oscar Jackson Sr. and his long history of fixing, building, and racing Hondas, then you’re missing a definitive chunk of the Honda experience.

Spoon Sports USA brought a whole line of cars for its booth, but it was this wild S2000 that made the parade lap. Fitted with an entire catalog of Spoon parts from the SW388 wheels to the quad-exhaust system and more, it was the one-off, multi-level top that everyone was talking about.

Art of Attack brought out Jose Mejia’s record-setting FK8 to display with PRL Motorsports and it looks every bit as good as it did when we featured it a few months ago, which you can see right here.

If you’ve ever seen an S2000 with a tow hitch attached, it probably wasn’t towing anything like this.

The bright orange, flared-out AP2 was followed by its matching, customized Honda Ruckus.

And if you’re going to have a Ruckus on hand, you can’t leave out a pair of original Motocompo.

Science of Speed set up its vendor booth, then jumped into line with their “Dream Project” NSX. We talked about this car back in 2017 when it debuted and much of the look remains unchanged, save for a switch to gold Advan GT that replaced the original gunmetal version.

This CRX doesn’t slot into any specific category surrounding the Homecoming event’s flagship vehicles but was a welcome addition to the lineup. Fitted with a bevy of authentic Mugen goods from top to bottom.

Similarly, this 80s-era 3rd gen. Civic hatchback has been expertly restored and incorporates an array of impossible-to-find Mugen attire.

Once often ignored in favor of its younger 1988-91 brother, the 3rd-gen chassis has picked up considerable steam in recent years.

One thing you won’t find at a Homecoming event is a shortage of unique, interesting Hondas. This Acty, for example, is a bite-sized piece of the brand’s history and has a knack for plastering smile across the faces of passerby’s.