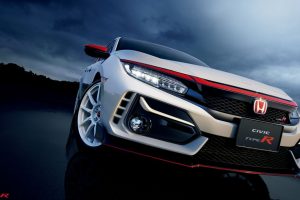 As the most outrageous-looking hot hatchback out there, the wing-garnished Honda Civic Type R doesn’t really need any extra help when it comes to visual distinction. The Japanese manufacturer has had a go, though, with a new range of parts for the updated FK8 available in via Honda Access.

The item on the menu that stands out the most is the set of Championship White forged wheels, which trim the Type R’s unsprung mass by 8.4kg. The designed is based on the wheel used by the NSX GT500 Super GT racing car, with the white contrasted nicely thanks to some Modulo red centre caps. The top sections of the spokes are widened, so each one looks a bit like a sword. “We pursued a balance between strength and beauty, which sets it apart from performance-oriented racing wheels,” Honda says (translated from Japanese).

They’re by far the most expensive element offered, weighing in at 275,000 yen (just under £2000, and it looks like that might be the price per wheel), but there are plenty of cheaper upgrades available. There’s a carbon fibre rear wing which is – admittedly – still quite spendy at 176,000 yen, or right at the other end of the scale, a new leather-clad gear knob for 20,350. Handy if you don’t like having your hand frozen in winter or sizzled in summer by the standard aluminium shifter.

Carbon fibre is a prominent theme, with a CF bonnet vent and interior trim also in the catalogue. Anyone with a Championship White Civic might also be interested in the snazzy red mirror caps and grille trim. To go with the gear knob, meanwhile, it’s possible to spruce up the interior with red lighting and illuminated Type R treadplates.

All of this appears to be specific to the Japanese Domestic Market, however, many of the offerings – including the carbon wing and the illumination kit – are available in the UK via four different accessory packs. Alternatively, Stoke-On-Trent-based Tegiwa sells the Modulo rims, provided you’re happy to part with £2700 a pop.