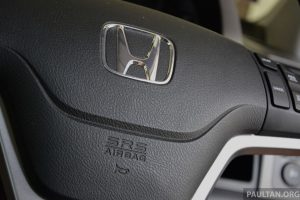 Honda has confirmed the 17th death in the United States linked to a faulty Takata airbag inflator, Reuters reported. This was found after a joint inspection with the US National Highway Traffic Safety Administration (NHTSA) which confirmed that the device was to blame for the death of of a driver of a 2002 Honda Civic in Mesa, Arizona resulting from a crash on August 20, it said.

The vehicle had been under recall since December 2011 for replacement of the driver’s front airbag inflator, while a recall for its front passenger airbag inflator was issued in 2014. Honda had sent more than 15 mailed recall notices to registered owners of the vehicle before the crash, and had also made other attempts to contact owners, according to the report.

The driver killed in this incident was not the registered owner of the car, and Honda said it was not certain if the driver was aware of the unrepaired recalls. The previous, most recently confirmed fatality in the United States to have resulted from a faulty airbag inflator was in June 2018, when a driver died as a result of a crash – also in a 2002 Honda Civic – in Buckeye, Arizona. Among the recent Takata airbag inflator-related recalls in the United States was for Nissan, which recalled 345,700 cars in January, of which 307,962 units were located in the country. As for Honda in Malaysia, the latest Takata airbag inflator recall for our country was in October 2019 for 23,476 cars across various models.

According to prior findings by the NHTSA, the cause of inflator-related deaths is the breaking down of propellant after long-term exposure to high humidity levels and large fluctuations in temperature, which causes the airbag to deploy with greater force than designed as a result.

So far, recalls for Takata inflators have involved around 100 million inflator units across 19 automakers globally, including 63 million inflators in the United States. The Japanese automaker had agreed in August to pay US$85 million (RM353 million) in settlements for an investigation by most states in the US concerning its use of the defective inflators manufactured by Takata.

The recalls have had tremendous effect on the Japanese auto parts company, which filed for bankruptcy protection in the United States and bankruptcy in Japan following total liabilities of 1.7 trillion yen (RM64.3 billion) in 2017. The firm began restitution payments to victims in 2019.