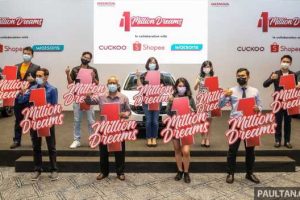 Honda Malaysia has officially announced the final three winners of its 1 Million Edition cars that were up for grabs in its 1 Million Dreams campaign. The three special edition models, which were prizes in contests organised by brand partners Cuckoo, Shopee and Watsons, were presented to the lucky winners at an event earlier today.

Megawati Affendi was named by Cuckoo as its winner, and she drove off with the City that was the prize in that particular contest. The Shopee contest winner was Muhammed Faisal Adnan, who won the 1 Million Edition HR-V, while Mohd Aisamuddin Mohd Azilah took home the BR-V after he was named the winner in the Watsons contest.

All seven one-off models, which celebrate Honda Malaysia’s one millionth vehicle built and sold here since it was established in 2001, are dressed in a Platinum White Pearl exterior, a black roof, black alloy wheels and red accents on the front end, door mirrors and wheels. Inside, there are embossed headrests and a red steering wheel 12 o’clock marker. Also included are 1 Million Dreams exterior and interior badges and a special leather key pouch.

“Last month, Honda Malaysia reached its one millionth sale unit milestone and celebrated the achievement with all Malaysians. The company presented four of the 1 Million special edition models to the lucky winners at the 1 Million Dreams Grand Finale, and today, I am very privileged to be here celebrating this outstanding achievement with all of you and presenting the final three 1 Million models to the lucky winners from our brand partners,” said Honda Malaysia’s newly-appointed MD and CEO Madoka Chujo.

“We are happy that the collaboration has curated greater excitement and experience for our customers in their journey of improving their living standards and completing their dream homes. We look forward to greater collaborations like this to inspire more to live healthier and happier,” said Cuckoo International founder and CEO Hoe Kian Choon.

“The Honda 1 Million Dreams campaign has provided a lucky and loyal Shopee user a once-in-a-lifetime experience, and from a brand they cherish. Being able to make a user’s dream come true further reminds us that strategic partnerships between brands, driven by a common goal, is effective as our customers stand to benefit from our shared efforts,” said Shopee Mall Malaysia head Kenneth Soh.

“Being the leading health and beauty retailer in the country, rewarding our members have always been one of the initiatives of our loyalty programme. We would like to thank all the Watsons members’ participation and look forward to expanding our collaboration with Honda Malaysia,” said Watsons Malaysia MD Caryn Loh.

The presentation event held earlier today also saw Honda Malaysia revealing its one millionth customer, Ahmad Sirwan Mat Tuselim, who purchased a Civic. To commemorate the milestone and mark the achievement, Honda Malaysia, together with Cuckoo, Shopee and Watsons, presented Ahmad Sirwan with a token of appreciation in the form of gifts worth more than RM8,000.