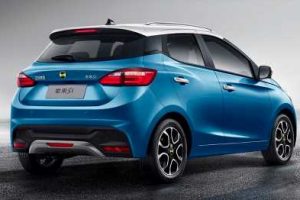 Ho Wah Genting (HWGB) has announced plans to introduce an all-electric vehicle called the Seiyong S1 in Malaysia. Introduced in its domestic market in December 2019, the Chinese hatchback from Beijing-based Seiyong Motor will be sold here in locally-assembled form. It was however not revealed when the car would make its official debut, and how much it would cost.

A 31.9 kWh lithium battery provides a claimed range of 302 km on a single charge, based on a NEDC cycle. Through fast charging, the battery can be juiced up from a 30% SOC to 80% in around 40-50 minutes, while regular charging will get the battery to full in around 10 hours. Other performance specs include a 110 km/h top speed. It looks fairly well equipped at the top end of things – the range-topping variant comes with a head-up display, eight-inch touchscreen with voice recognition (Mandarin only) and a single-zone auto climate system. Also on, keyless entry and push-start ignition and auto headlamps, and there’s a phone app that allows some of the car’s features to be accessed remotely.

Based on those specs, HWGB is very much targeting the S1 as a city commuter, suitable for a variety of consumers ranging from housewives and college students to white-collar workers.

According to HWGB CEO Datuk Aaron Lim, the local EV scene is still in its infancy, and as such the company believes that the Seiyong S1 will be able to help push things along. “We firmly believe the EV industry is a fast growing industry in Malaysia with a lot of untapped potential. As the public environmental concerns are higher than ever before, we hope to provide and encourage a greener mode of transportation in Malaysia,” he said.

“The innovative development strategy of Seiyong Motor has demonstrated that it has a strong market expansion plan and its core competitiveness is one of the factors to its success. In the next three to five years, we believe that Seiyong Motor will eventually be a key player in the global electric vehicle industry with the Seiyong S1,” he added.

When it arrives, the S1 will be marketed through HWGB’s wholly-owned subsidiary, HWGB EV, which will also assemble the model – and subsequent offerings from the brand – in the country. In the MoU that was signed between HWGB EV and Seiyong Motor last week, it was also revealed that the S1 is likely to be sold under a new brand name, which will be collectively decided in the near future by HWGB EV and Seiyong Motor.