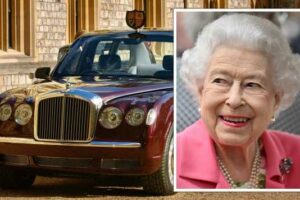 Queen to offer ’historic glimpse of her’ says commentator

The Queen will celebrate her Platinum Jubilee next week with thousands of people gathering in front of their televisions to catch a glimpse of the celebrations. And one thing that is almost as famous as the Queen is her posh Bentley limousine.

The Queen is expected to travel in her Bentley which is worth more than £10million.

It is the second most expensive car in the world, only losing out to the gold-plated Rolls-Royce owned by the Sultan of Brunei.

With the Platinum Jubilee preparations in full swing, motoring experts at Select Car Leasing have now revealed several things that Royal fans might not know about the car.

The car was designed by the Queen and the Duke of Edinburgh:

The car giant Bentley has previously said that both the Queen and the late Prince Phillip had significant input in the design of the car.

For the interior, the Royals chose a high-end lambswool cloth for a comfortable seat covering.

The car was gifted to the Queen in celebration of her Golden Jubilee:

Two Bentley limousines were gifted to the Queen as she celebrated 50 years on the throne during the Golden Jubilee.

Both cars are kept in the Royal Mews and are used on official engagements, most recently at the Duke of Edinburgh’s funeral, WalesOnline reported.

It’s one of the rarest motor models in the world:

The two Bentley limousines owned by the Queen are one of a kind.

There are only two of them in the entire world.

The car has now become a prized possession in the Royal vehicle armoury.

Bentley’s long-standing connection with the Royal Family also meant that the British car giant promised the Queen the first-ever Bentley Bentayga model when it launched in 2015.

The car’s flags depict whether the Queen is travelling in the vehicle or not.

The flags on the bonnet of the Royal Bentley suggest whether the queen is travelling inside.

The traditional “flying B” is replaced with her mascot of St George slaying the dragon, or a lion if she’s in Scotland.

The car is always escorted by marked and unmarked Royal Protection Squad vehicles, as well as local police vehicles and motorcycle riders.

The car possesses world-class security features to protect the Queen.

The Royal car is required to provide safety from any outside threat.

The cabin in the Queen’s limousine is air-tight to ensure anyone inside is protected against the threat of gas attacks or explosions.

This ensures that the vehicle can keep travelling even if the tyres are damaged and flat.