Home » Here's How The Tesla Semi Is Evolving

Here's How The Tesla Semi Is Evolving 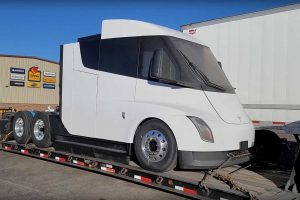 We can learn a lot from spy shots, videos, and people who follow the Tesla Semi.

Spy shots of the Tesla Semi Truck prototypes have started popping up all over the country. The Tesla Semis spied in different states seem to be the same truck, but looking closely, we can spot a few differences. So what’s different? And how do these differ from earlier prototypes?

First, Tesla has made a few slight changes to the exterior of the class-8 electric hauler that suggest the automaker is performing further R&D. By testing these trucks on public roads, Tesla has been gathering real-world data for a few years now.

I decided to compare a few of the recently spied Tesla Semis from behind — where they have different electrical boxes installed in back. This, potentially, indicates that Tesla is also experimenting with variable electrical and battery management systems.

A look at the side profile of the new Tesla Semi Truck prototype seen via the video of the Trucker/YouTuber Cory Draper reveals a few things. And that’s not all. Further differences can also be spotted via a recent Instagram post (as reported in Electrek) — check out the intriguing video and photos demonstrating even more design experimentation below.

So when will we stop seeing these prototypes and finally see the official production version of the Tesla Semi? In a company email last year, Elon Musk told Tesla employees that it’s time to bring the electric Semi to volume production but the timeline appears to have been pushed to later this year.

Fast forward to the recent Q4 2020 Tesla Earnings Call, and Musk claimed that the Tesla Semi Truck would require at least five times more batteries than a car. And, according to Teslarati, in a recent podcast with Joe Rogan, Musk confirmed that the Semi would be equipped with a whopping 500 kWh battery pack. That’s a lot of batteries compared to Tesla’s sedans and SUVs produced thus far.

Regardless, more and more companies are pre-ordering the electric hauler. Tesla just received its biggest Tesla Semi Truck order towards the end of last year. Interest appears to be growing rapidly for the Tesla Semi, but battery supply will need to ramp quickly to meet this demand.

Written by: Iqtidar Ali. An earlier version of this article was originally published on Tesla Oracle.