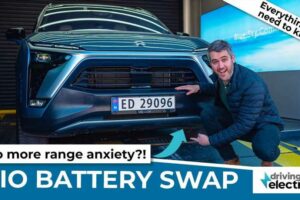 Nio has quickly become a global leader for electric vehicle battery swapping technology and now operates over 900 swap stations all of which are in China. But in its quest to have 5,000 such stations operational by the end of the decade, Nio isn’t only   looking at its home country, but other important markets like Europe and the United States too – 1,000 of those swap stations aren’t planned for China.

The company is already present in Europe, through a dealership in Norway, where it has also installed the Old Continent’s first new battery swapping station, one of the 20 it wants to have operational in the country by the end of 2022. They appear basically identical to the ones it built in China, and they needs under 5 minutes to extract the depleted battery from under the vehicle and install a fresh pack that has been charged to 90 percent, not 100 percent, in order to lengthen the life of the cells.

Each station holds 13 battery packs that are kept in temperature-controlled conditions to keep everything optimal, especially in Norway where the winters are especially long and cold. Norwegian Nio owners who opt not to buy the battery pack, and select Nio’s Battery as a Service (BaaS) subscription instead, will be able to use this swapping station for two free swaps each month (or the equivalent kWh of charging) and any additional swaps will cost extra.

According to DrivingElectric, Nio is currently charging €10 per swap plus an additional 20 euro cents per kWh. The BaaS service was only made available in Norway this March and according to the manufacturer, some 92 percent of Norwegians who bought a Nio (currently only the ES8 SUV is available) opted for BaaS, which is probably why the company wants to have 20 swap stations in service by the end of 2022.