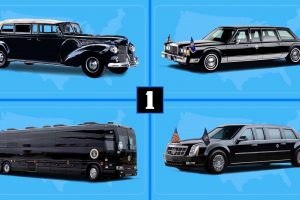 The Beast is the latest in a long line of specially equipped rides for the commander in chief.

By now, the world is familiar with the big black Cadillac limo known as The Beast. Entering service in 2018 for President Trump, the Caddy is basically a tank with a snazzy grille, but it’s just the latest in a long line of special vehicles built for the U.S. commander in chief. And they haven’t all worn Cadillac badges – one of the vehicles here is actually a sinister-looking bus.

With a monumental presidential election just days away from this posting, eyes around the world are on the United States and since we’re in the business of cars, there isn’t a better time to take a look back at the evolution of presidential rides through the decades. Vanarama compiled some information, and you might be surprised at some of the details that follow. We’ll start the journey all the way back in 1939, culminating with the current limo parked at 1600 Pennsylvania Avenue.

The journey begins with the first customized car for a president, which in this case was Franklin Delano Roosevelt. Modifications were slim compared to modern standards, with larger running boards and grab handles being the primary additions. However, following the U.S. entry into World War II, the car was further reinforced with armor plating, bulletproof tires, storage for guns, and thicker glass.

The armor upfit on the 1939 Lincoln was built-in from the very beginning on the FDR’s 1942 limo. It added upwards of 7,000 pounds to the car, which required upgraded power-assist brakes to help stop it. After the war, the car was given a facelift for a more modern look.

With World War II in the rearview mirror, President Harry Truman commissioned a new Lincoln limo to his specifications. Armor plating was still part of the package, but more benign modifications like a raised roof were added, and a convertible model was also built. It would be the last of the V12-powered presidential cars, exiting the scene with a 5.8-liter 12-cylinder engine producing 152 horsepower.

The elegant Continental saw four variations used during its tenure that stretched into the early 1980s. The final 1972 model was actually given a facelift towards the end of its run to look like the late 1970’s Continental. It would be the last convertible model used by a president, following the assassination of President Kennedy in 1963. The Continental would also see assassination attempts of President Ford in 1975, and President Regan in 1981.

The first Caddy in the presidential fleet came with the Fleetwood in 1983. This particular model only served with President Reagan through the 1980s, but it continued to offer armored protection with the doors, glass, and a raised roof that allowed occupants a better view outside.

The first President Bush would use the last Lincoln to serve in a presidential capacity. Heavily armored, it was also the first to receive a highly-modified drivetrain to cope with the extra weight from the armor.

Technology was quickly evolving through the 1990s, and the 1993 Fleetwood used by President Clinton was the first to really dip a toe into the high-tech world. Yes, it was armored up and with a big V8 engine, it could reportedly exceed 140 mph. But it also was decked out with telephones and satellite communications, keeping the commander in chief in contact with VIPs while on the move.

Folks familiar with General Motors know that the automaker’s last body-on-frame sedan came in 1996. As such, the 2001 DeVille for the second President Bush wasn’t really a DeVille. It marks the first time a vehicle was truly custom-built from the ground up, featuring an SUV frame with heavy armor and a bevy of tech including night vision systems.

Following the terrorist attacks of September 11, a stronger presidential limo for President Bush was commissioned. Once again, it was custom built from the ground-up on a heavy-duty chassis, though the exterior resembled the DTS sedan. Five-inch armor plating, run-flat tires, and fixed windows kept the president secure, while a range of technology kept him in communication at all times. It also has the distinction of being the fastest known limo on the list, reaching speeds of 150 mph.

President Obama’s Cadillac limo wasn’t nearly as fast as its predecessor. By the time all the armor and equipment was added, the Caddy could only reach approximately 60 mph. However, it was easily the most advanced and protected presidential limo of the day, incorporating tear gas cannons, provisions for defending against chemical attacks, and even carrying blood compatible with the president in case things get really bad.

Here’s the outlier on the list. While not a presidential limo, this custom bus was created in 2011 for use in the presidential motorcade and serves as a rolling command and control center that the president can use. It’s armored to the hilt and packs provisions for surviving chemical attacks, but it also holds advanced communications and specialty equipment to literally run the country on the road.

Technically speaking, The Beast is a name that applies to many presidential limos but the latest version used by President Trump is the beastliest of them all. It’s basically an updated version of the 2009 model with modern Cadillac styling, steel, and ceramic armor, and enough protective systems to basically call it a rolling bunker.

You’d expect the latest limo to be the most expensive, and from a straight-dollar standpoint, you’d be correct. However, when inflation over the years is factored in, that’s not the case at all. Here’s a quick breakdown of costs for the cars that have pricing data.

US Presidential Limos Over The Years