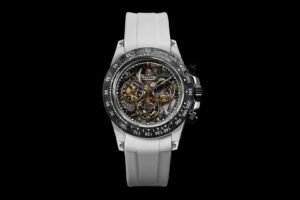 Hennessey Performance and Skeleton Concept have partnered to design a watch. The Hennessey Venom F5 Concept Chronograph is a new, limited-edition timepiece that’s tied to an individual Venom F5 model through the wristband and inscription.

The sapphire case goes through an extensive creation process, beginning it as aluminum oxide that’s heated until molten. It’s then cooled into a crystalline block that’s inspected before it’s machined 24 hours a day for over 30 days into the final piece. Another careful inspection and polishing complete it.

The chronograph has other touches from the car, featuring a carbon-fiber bezel engraved with a high-contrast tachymetric scale that can measure average speeds of up to 248 miles per hour (400 kilometers per hour). Each watch is tied to an individual Venom F5 with a chassis number inscription that’s surrounded by a “The American Dream Never Sleeps” engraving. Skeleton Concept further connects its watch with the specific Hennessey by color-matching the band to the car’s exterior color.

The super-exclusive Hennessey Venom F5 debuted in late 2020, with the company building just 24 examples. Its limited run certainly added to its rarity, but the Hennessey has the power to back up its seven-figure price tag. The car features a bespoke twin-turbocharged 6.6-liter V8 engine that produces 1,817 horsepower (1,345 kilowatts) and 1,193 pound-feet (1,617 Newton-meters) of torque, which is capable of sending the car to 62 mph (100 kph) in less than three seconds. It’ll allegedly go from 0-124 mph (200 kph) in 4.7 seconds.

“The car pushes the boundary of possibility through advanced engineering, a parallel we’ve brought to the watch that heroes engineering with its unique and beautiful sapphire case,” said Hennessey COO Alex Roys.