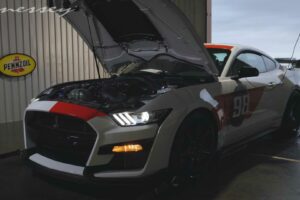 Late last month, Hennessey Performance introduced the Venom 1200 Mustang GT500. It’s a maniacally modified Ford Mustang Shelby GT500 with much more power than the stock car. Hennessey took its latest creation to the dynamometer to see how much of that power actually makes it to the ground.

“Our engineers were able to coax more than 400 additional horsepower out of the engine, which takes performance to supercar levels,” said company CEO John Hennessey. He added that only a handful of cars are as powerful as the Venom 1200, “especially at this price point.”

Hennessey achieved such a massive boost with some big upgrades to the powertrain. The Venom 1200 features a higher-capacity 3.8-liter supercharger, upgraded fuel rails and injectors, an air/oil separation system, and a high-flow induction system. It also receives all the necessary belts, hoses, clamps, and hardware. Hennessey also installed a new software calibration for the engine and the car’s dual-clutch gearbox. The vehicle is capable of running on either E85 or race fuel.

Hennessey is building just 66 examples of the Venom 1200, which will cost $59,950. That doesn’t include the Shelby GT500 you have to supply. Cars will come with unique badging and a special serial-numbers plaque. It also comes with a one-year, 12,000-mile warranty.