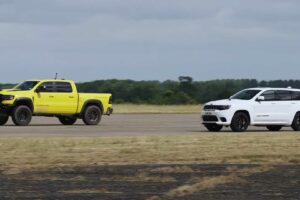 High-performance trucks and SUVs are the norm today. There are plenty available from automakers, and aftermarket tuners like Hennessey have been playing in this space for years, creating some genuinely bonkers machines. Carwow has one – the Hennessey Mammoth 1000 TRX – and the publication is putting the truck up against another high-powered sibling, the Jeep Grand Cherokee Trackhawk.

The two models use the same supercharged 6.2-liter V8 engine, but the engine makes a lot more power in the truck thanks to Hennessey’s various performance upgrades. The TRX now makes 1,026 horsepower (765 kilowatts) and 969 pound-feet (1,314 Newton-meters) of torque. An eight-speed automatic transmission feeds power to all four wheels. The Jeep’s engine makes much less power, but it’s still pumping out a bonkers 707 hp (527 kW) and 645 lb-ft (875 Nm) of torque. It has all-wheel drive and an eight-speed gearbox, too.

The first race saw the Jeep rocketing off the line with launch control. This put the TRX at a disadvantage that it could not overcome, finishing in second place, far behind the Jeep. The second race was closer, with both drivers using launch control this time, but the Hennessey still finished in second.

The Jeep also won the final brake test, but there wasn’t a big gap between the two competitors. The truck’s off-road tires and extra weight did not help it, but the Jeep had worn brakes. The Jeep Grand Cherokee Trackhawk and Hennessey Mammoth TRX are epic vehicles with gobs of power on tap, and you wouldn’t want to meet either on the drag strip.