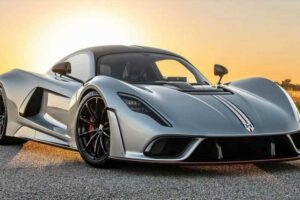 John Hennessey opened up about the Venom F5 hypercar and Deep Space EV in an interview with Top Gear. He suggests setting speed records is no longer the company’s primary focus because of the changing landscape for these high-performance machines.

“Top speed only becomes relevant when there’s rivalry,” he told Top Gear. Hennessey is referring to Bugatti’s announcement that it would not attempt speed records following the Chiron Sport hitting 304.773 miles per hour (490.484 kilometers per hour) at the Ehra-Lessien test track. Mercedes made a similar statement about the AMG One not trying to beat the Bugatti.

Hennessey still plans to take the Venom F5 on a run over 300 mph. To really beat Bugatti, he wants to do a two-way run and take the average speed, versus the Chiron Sport’s single-direction sprint. Don’t expect to see this attempt for a little while, though.

“We’ve only just delivered our first car, so we don’t need to deliver some top-speed news at the same time. But we’re consistently going fast in testing,” he said.

Hennessey said that the company decided to make the Venom Roadster because there was so much customer interest in it. The open-roof model debuts on August 9. He says there’s a possibility of more variants coming later.

The Deep Space will take Hennessey into the electrified age. The company reportedly doesn’t plan to show the model to the public until 2024. At this stage, the car is just four chairs with tape marking the vehicle’s dimensions on the floor. “You have to start somewhere. The six-wheel drive and diamond shape seating design was all my idea,” Hennessey said.

When complete, the Deep Space should make over 2,000 horsepower (1,491 kilowatts). The focus isn’t solely on speed. Hennessey says “Rolls-Royce is an inspiration” for the vehicle, suggesting it should be quite luxurious.

Hennessey is projecting the Deep Space to have a range of 620 miles (1,000 kilometers) on a single charge. It also wants the vehicle to be the quickest four-seat vehicle to reach 200 mph (322 km/h).