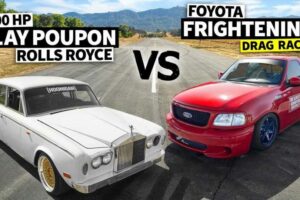 In a new episode of “This Vs. That,” the Hoonigan crew has paired an unlikely duo for some intense drag racing– a 1969 Rolls-Royce Silver Shadow and a Ford F-150 Lightning tribute truck. Neither are stock, and that’s why the two are facing off in the latest Hoonigan YouTube video.

The Rolls gets a stellar launch in the first race, gaining a sizable lead early and keeping it across the finish line. The Rolls beat the Ford by a car length and a half. The second race gives the hit to the Ford, which gets a better start off the line. The truck wins the second race, but the Rolls didn’t have the greatest outing, missing shifts and falling behind the red Lightning clone.

The final race gives the hit to the truck for the second time, but the Rolls is ready. The Silver Shadow lunges from the starting line and is able to get a lead, a lead that the Rolls-Royce keeps until the finish line. A “bonus” race between the two ends with another F-150 victory, but the Rolls spoiled it by lifting off the accelerator.

The Ford struggled to put its power to the ground, allowing the Rolls to crush it in the drag races. It’s quite the treat seeing a tuned 700-hp F-150 battle a modded Rolls Royce that produces 900 hp thanks to a Hellcat crate motor. Keep building wild things so we can watch them race.