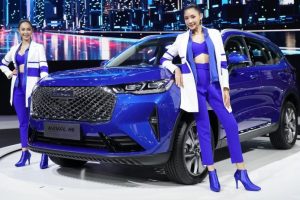 Great Wall Motors has officially revealed the H6 Hybrid at the ongoing Bangkok International Motor Show, the first time the petrol-electric version is being shown anywhere. The rather handsome C-segment SUV is set to be launched in May with deliveries expected to kick off in June, according to Headlight Magazine.

Power comes from a 1.5 litre turbocharged four-cylinder engine, which in standard petrol form in China makes 169 PS and 285 Nm of torque. Here, the mill is paired with a 130 kW (177 PS) electric motor to produce 243 PS and an impressive 530 Nm of torque. The official blurb is rather vague about the details, but the Thai publication reports that the H6 Hybrid features a seven-speed dual-clutch transmission.

Beyond the new powertrain, the H6 Hybrid is practically identical to its petrol-powered brethren, with only the HEV tailgate badge marking it out. That’s a good thing, as the regular H6 is quite a looker, with details that include a six-point Fangsheng pattern grille, “Rising Flame” LED headlights, X-shaped front bumper, distinct C-pillar kink and full-width taillights.

Inside, the H6 features a futuristic cabin with a minimalist dashboard, a tall centre console with a rotary gear selector and freestanding 10.25-inch instrument and 12.3-inch infotainment displays. Thai models will be available with a panoramic glass sunroof and integrated ambient lighting in the instrument panel.

The latter even comes with what GWM calls Wisdom Dodge System (WDS), which will move the car to the side of the lane when passing by lorries and other large vehicles, moving back to the centre once the manoeuvre is completed. More information on the H6 Hybrid, including pricing and full specifications, will be released during the launch of the car in the Land of Smiles.