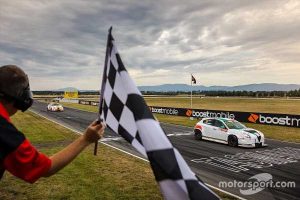 Jay Hanson has lost his podium finish in the opening race of the 2021 TCR Australia season at Symmons Plains after being hit with a 10-second penalty for causing a collision with Chaz Mostert.

Ash Seward Motorsport driver Hanson was battling with Mostert for third position when he clipped the Audi of the Supercars ace on lap 17, pitching him into a spin and sending him tumbling down the order.

Mostert was only able to recover to sixth in the remaining three laps, while Hanson was provisionally classified third in an all-Alfa Romeo podium.

At the end of the race, Hanson was quick to apologise to Mostert, admitting he was to blame for the contact between the two.

“I want to say sorry to Chaz,” he said. “It was completely my fault, I locked a brake. I’m so sorry.”

Stewards have now decided to hand Hanson a 10-second penalty for the incident, dropping him down to seventh in the classification.

Mostert gains one place as a result and moves up to fifth, with HMO Hyundai driver Josh Buchan elevated to the final spot on the podium.

There are two more TCR Australia races tomorrow, both of which will be shown live and free by Motorsport.tv.