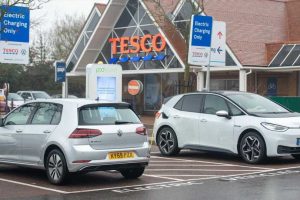 More than half of UK children want their parents to switch to electric or plug-in hybrid cars to become more eco-friendly, new research suggests. A study of some 1,250 seven- to 12-year-olds by French car maker Peugeot found 54.2 percent have tried to get their parents to be more environmentally friendly by recycling, reusing and even switching their car.

More than two-thirds of the children questioned extolled the virtues of electric vehicles (EVs) and plug-in hybrids, with 67.8 percent believing the zero-emission-capable cars are good for the planet. And the study also quizzed the parents, of whom 55.3 percent said their children wanted them to own an electric car in the future.

Peugeot’s research also revealed the role children play in their parents’ purchase decisions, with more than seven in 10 kids saying they are consulted when it comes to big buys. Some 72.2 percent said they were asked about or involved with purchases such as cars or holiday destinations.

David Peel, the managing director of Peugeot UK, said the study’s results were encouraging, with youngsters promoting EVs. He also said the influence children have on their parents would help change consumers’ behaviour.

“It’s great to see the next generation of car buyers so interested in full electric and plug-in hybrid vehicles, and to know that they understand the positive impact these vehicles have on the environment,” he said. “With this in mind, it’s really positive to see through our research how influential children are in the purchase decisions their parents make.”

The news comes in a year that has already seen increases in the number of electric cars hitting British roads. According to the Society of Motor Manufacturers and Traders (SMMT), which collects data on the UK’s car registrations, electric vehicle sales were up by 165 percent during the first nine months of 2020. By the end of September, more than 66,000 new EVs had been registered, compared with 25,000 during the same period in 2019.

That result, which came despite the coronavirus pandemic almost completely shutting down UK factories and dealerships, saw EVs’ market share rise to more than five percent. And the story has been similar for plug-in hybrid cars, which now make up 3.4 percent of new car sales. Some 23,000 new plug-in hybrids were registered during the first nine months of 2019, but that rose to more than 42,000 during the same period in 2020.