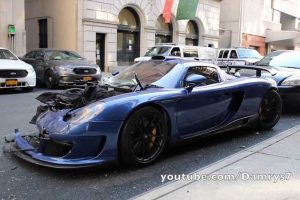 Videos and photos of the incident apparently weren’t enough.

You may recall a very publicized incident that occurred nearly a year ago on the then-empty streets of New York City. A rare Gemballa Mirage GT was captured on video crashing into several vehicles before finally coming to a stop. Video even captured the driver behind the wheel, who was later identified as Benjamin Chen. Now, charges against Chen for the incident have apparently been dismissed.

According to Road & Track, the case against Chen was dismissed on March 15 in an appearance at the New York Criminal Court. The reason for dismissal was apparently a lack of proof – Road & Track cites a record from the court appearance as stating “The People are moving to dismiss this matter because the case cannot be proven beyond a reasonable doubt.”

Multiple videos and photos captured the modified Porsche Carerra GT as it literally bounced through Manhattan on April 7, 2020. At the time, New York City was a virtual ghost town due to COVID-19 lockdowns, and streets normally filled with traffic were unnervingly empty. The blue supercar struck a minivan first, then proceeded to limp its way down the street while shedding crumpled parts in the process.

The severely damaged Porsche eventually struck several other cars before police finally surrounded the car. One video clip clearly shows the driver still sitting behind the wheel with police standing by. The driver was identified as Chen, who was reportedly charged with operating a vehicle under the influence and reckless driving.

As the video at the top of the article shows, the Gemballa-tweaked Porsche was significantly damaged. No injuries were reported from the event, which remains well-documented through videos and photos on social media. Motor1.com has reached out to the New York State Unified Court System to request publicly available information on the case. We will update this report if new information is received.