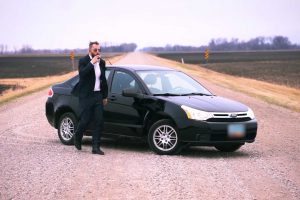 It even features a cover of The Weeknd’s “Blinding Lights.”

Cutesy online classified ads going viral are nothing new. Years ago, creative Craigslist posts would make the rounds, and today, online users and ingenious car sellers have more avenues than ever to get out the word, especially if their car is a boring one. That’s what John Goerke did in an attempt to help sell his 2010 Ford Focus SE, spending a month with his friends creating a two-minute video ad uploaded to YouTube.

The plot of the ad – yes, it has a plot – is about a man having a rough night who gets revitalized by getting behind the wheel and driving the Ford, according to Goerke, who spoke with The Jamestown Sun. The video shows the man cruise out of town in Hollywood blockbuster fashion before ending up on a rural dirt road. The ad ends with Goerke climbing out of the car, his shirt collar lose, and a cheesy “Bring your cool to this 2010 Ford Focus” voice-over booms as the price flashes on the screen.

Goerke, who’s owned the car for three years, has to upgrade thanks to a new baby at home, which is an addition to his two toddlers. Goerke got the idea for the ad from the “Blinding Lights” music video by The Weeknd, which there is a cover of in the ad. However, For as creative as the car is, Goerke still has it a month after uploading the video, which has garnered fewer than 8,000 views since its upload on November 22

The Focus has 120,000 miles on the odometer for $5,999. According to Goerke, it’s been well maintained with frequent oil changes, and it looks to be in superb condition in the video. Whoever buys it will get a 2.0-liter four-cylinder sending 140 horsepower (104 kilowatts) to the front wheels. See, it’s not cool, but the ad is.