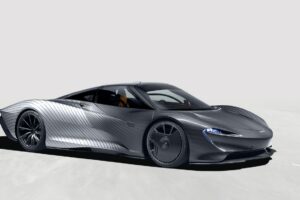 The McLaren Speedtail is an honest-to-goodness modern marvel. It’s a testament to what a lot of determination, engineering prowess, and many, many hours in the wind tunnel can do. Only 106 of the hypercars were going to be made, and Albert—the Speedtail pictured here—is one of the last.

More of an homage to the original McLaren three-seater, the F1, this special (well, more special Speedtail) bears the name of the Albert Drive testing facility where the F1 was developed and built in the early ’90s. The Albert customer car also shares its name with the original Speedtail MVY02 Prototype, which carried the Albert name, too.

The custom livery on the Albert Speedtail was achieved by painting over a 1K gloss visual carbon fiber body. The paint itself had to be applied on the car after the body panels had been installed. It’s easier to paint body panels while they’re hanging and off the car, but McLaren’s technicians had to make sure all the lines matched up from front to back.

In total, the process from design to execution took three months. McLaren said it was one of the most difficult projects its McLaren Special Operations (MSO) team has ever undertaken, but the results speak for themselves. This is one special Speedtail, which is by itself already one heck of a car and one serious Albert.

As a quick refresher on just how cool the Speedtail is, it’s a 1,070-hp hybrid (similar to the system found in the P1 hypercar) that will get from zero to 186 mph quicker than a Bugatti Chiron. That’s thanks to its teardrop shape and uniquely slippery aerodynamics. We can’t think of a cooler way to transport you and two of your closest friends at 200-mph-plus. Oh, yeah, it’s a three-seater, too.

If Albert looks as special to you as it does to us (and you live in the Los Angeles area), it will be shown at Sunset GT, a special cars and coffee event in SoCal, on August 8. We might just be there to check it out ourselves.