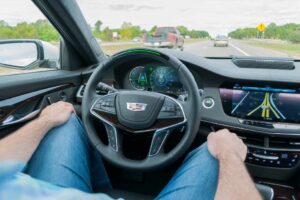 A new battlefield has emerged in the century-long tussle between General Motors and Ford: hands-free driving technology.

In recent testing of GM’s Super Cruise in the 2022 Chevrolet Silverado and Ford’s Bluecruise in the 2022 Ford F-150 Lightning, one thing became clear. GM is far ahead of Ford when it comes to limited hands-free driving, which is an evolution of adaptive cruise control.

Cruise, or speed, control dates as far back as the rivalry between America’s top two automakers. Yet, the first car to feature a modern version of cruise control was the 1958 Chrysler Imperial that was advertised as “Auto-pilot.” That’s the same and now controversial name Tesla uses for its semi-autonomous drive system. History may be recursive, but this technology has come a long way.

The promise of a car driving itself in traffic while the operator tends to other business has never been closer to reality. And while the technology exists, the current infrastructure and legal framework keeps it at bay. To be clear, there is no such thing as a fully self-driving car on sale today. That threshold of being able to enter a destination and go from point A to point B with no interaction between car and passenger has been identified as a Level 5 advanced driving assistance system (ADAS) by the Society for Automotive Engineering. Super Cruise, Autopilot, and Bluecruise, among others, are considered Level 2, nudging towards Level 3.

Level 2 has been identified as using active lane control and adaptive cruise control at the same time, with the driver maintaining control of these functions even if their hands are off the wheel. Most new cars offer this level of technology, with adaptive cruise control maintaining the gap between a lead car and providing a nice respite on highways; active lane control keeps the car centered in its lane, but can be obtrusive to some drivers, based on the latest customer satisfaction survey from J.D. Power.

Level 3 essentially means that once the driver initiates the system and sits behind the wheel, the system takes over for the rest of the way without any intervention from the driver, until the system demands. We’re not there yet.

SAE levels of driving automation, from none to fully self-driving

Compared to Super Cruise, Ford’s Bluecruise isn’t quite there yet either. Here’s why.

Both systems use forward-facing cameras as well as navigation info pulled from the GPS and a map database that gets updated routinely (GM says about 7-8 times a year). First launched in 2017, Super Cruise has a significant advantage in tech development. It employs lidar mapping, whereas Ford uses radar, which isn’t as accurate or precise in detecting smaller objects. Originally called Active Drive Assist, Bluecruise (or Activeglide on Lincoln vehicles) didn’t launch until the second half of 2021.

The difference in mapped miles is significant as well, since, unlike Tesla, Ford and GM will not let their systems engage unless it’s part of the mapped database limited to divided highways such as interstates and state highways. GM claims more than 200,000 miles of mapped highways for hands-free driving in U.S. and Canada, and Ford claims to have 130,000 miles. Both automakers say the availability expands with more mapped highways via frequent over-the-air updates.

In practice, they both are an extension of adaptive cruise control with a couple more icons, messages, and warnings mixed in. Also unlike Tesla’s Autopilot, GM and Ford employ a driver-facing camera to monitor eye position and engagement with the road. The monitor for Super Cruise is a tiny camera on the top of the steering column, and the top of the steering wheel itself houses a light bar that’s green when active, or pulsing red when it demands driver intervention.

A similar camera sits on the steering column of the Mach-E, but on the F-150 there are two driver-facing cameras: one is on the left A-pillar by the door, and the other is offset to the right of the steering wheel on the dash between the instrument cluster and touchscreen.

It’s possible to travel hours in a GM vehicle with Super Cruise activated without needing to intervene, or just by tapping the wheel. To engage the system, press the cruise control button on the steering wheel. A gray steering wheel icon in the center of the instrument cluster or at the top of it will turn green when its in Super Cruise territory. The lightbar in the steering wheel activates from nothingness to green. If the vehicle is not centered in its lane to start, the lightbar appears blue until the conditions are met for it to turn green. It’s unmistakable that it’s on, especially when the voice commands confirm it.

The latest update to Super Cruise includes an automatic lane change function for passing. The driver no longer has touch the indicator stalk. If you’re in the right lane with Super Cruise set at 70 mph, say, and the lead car is going 65 mph, the system will check to see if the passing lane is open, and if so, it will begin a lane change. Before it does an alert flashes in the cluster and the seat side vibrates, so if you’re shifting to the right the right side of the seat will vibrate. Then it activates the blinker, checks the blind spot, and even hustles a few mph over the setting to then clear out of the passing lane and back into the right lane once well clear of the passed car. It’s more considerate than most drivers, and better. And it makes Super Cruise super cool.

Most importantly, it instills confidence and acts as a reassurance. Of all the systems I’ve tested, including earlier iterations of Tesla’s Autopilot, Super Cruise fills dreams of safe, relaxed, open highway cruising. Iterations of Super Cruise with trailering support don’t have the automatic lane change function, but do enable Super Cruise to work while towing.

Because its iconography is blue in the spirit of the Blue Oval, Ford’s Bluecruise is not as clear. Add in a blue background on the Mach-E Mustang and F-150 Lightning, and it’s not as obvious as the green iconography or steering wheel lightbar on Super Cruise. A blue steering-wheel icon with “Hands-Free” appears on the left side of the cluster, which is tiny on the Mach-E Mustang, and a wee little green icon also appears in either the lower or upper corner.

Bluecruise is not as confident or sophisticated as Super Cruise. Super Cruise uses an HD GPS receiver that locates the vehicle within about six feet of its lane, so it knows where it is. Ford relies on cameras and sensors alone, so it is less aware of where it is.   It can get confused near off ramps and wary of merging lanes. In my testing on both the Mach-E Mustang and F-150 Lightning, it tended to pinball between the lane for a longer period of time than some cars equipped with only active lane control. It seems to take longer to learn the road patterns, and on curves, ramps, merges, it can be as dodgy as a teenager in a driving test. It doesn’t hesitate in requesting the driver to take over, and it’s not as relaxing because the steering wheel sensor relies on a tug or some degree of torque from the driver, instead of the touch capacitive steering wheel on Super Cruise.

Bluecruise does not have an auto lane change function yet, but Ford hasn’t rolled it out yet.

What if something goes wrong?

Ford BlueCruise in the 2022 F-150 Lightning, with the driver monitor camera to the right.

Both driver-facing cameras read head and eye position to make sure eyes are on the road. If it detects otherwise, Bluecruise will flash an alert in the instrument cluster that says “Watch the Road,” and there may be an audio reminder. If you don’t respond to the warning, Bluecruise shuts down and automatically slows the vehicle while maintaining the center lane. To turn it off manually, just press the cruise control button.

Ford BlueCruise warning in the F-150

If Bluecruise can’t read lane markings or the lane becomes too narrow, and it detects that the driver’s eyes are not on the road, it will brake and maintain the lane until the driver reengages.

Super Cruise requests intervention when encountering unusual traffic situations, when exiting the highway and when merging into traffic, or at a stop or intersection, railroad crossing, or pedestrian crossing. If the system detects the driver’s eye or head position away from the road (such as looking down at a phone), the lightbar flashes green for a few seconds and requests the driver to pay attention and tap the steering wheel. If the driver does not pay attention, audible chimes, seat vibrations, and messaging in cluster will appear, before the lightbar flashes red.  and the other alerts intensify. If there’s still no reaction, Super Cruise goes into emergency mode and activates the hazards, applies the brakes to a stop, and alerts emergency services.