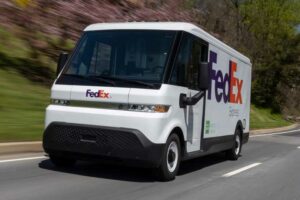 At some point, if they aren’t already, packages might come to your door not in a rumbling, gas-powered delivery van, but perhaps in a fully electric vehicle like BrightDrop’s Zevo 600 (previously called the EV600—the reasons for the name change are obscure). You might not care how your quick-ship junk gets to your door, so long as you get it on time, but fleet managers are going to be keenly interested in the specifics of that “how,” particularly via the emerging class of EV delivery vehicles. That’s because things like maintenance costs, efficiency, and purchase price are all of the utmost importance—as is downtime, which for an EV will be regularly scheduled so it can recharge.

BrightDrop’s Stephen Marlin achieved the GUINNESS WORLD RECORDS® title for greatest distance traveled by an electric van on a single charge, in a BrightDrop Zevo 600, with a journey from New York City to Washington, D.C.

We don’t have all the data points for you yet. EV delivery vans like the Zevo 600 and Rivian’s Amazon van are fairly new, and for some reasons GM (BrightDrop is a subsidiary) is being coy about crucial information like storage capacity of its Ultium batteries—which are similar to what the Hummer EV uses. But we have one number we can share with you: “nearly 260 miles.”

Which represents about how far the Zevo 600 went recently, snagging a distance record certified by Guinness—for whatever that’s worth. For a big, boxy vehicle of substantial size, that’s a big accomplishment. But it’s also a bit of an esoteric record for now, as it has few competitors. Still, 258 miles—the actual distance the Zevo 600 travelled on its journey from New York City to Washington D.C., a BrightDrop representative told MotorTrend—is enough juice for a fair number of urban and suburban daily routes, we’d imagine. It could likely even travel farther on such localized routes, given the energy it could recoup through braking that it likely wasn’t getting on its highway drive from New York to D.C.

BrightDrop has a deal with FedEx, aiming to provide 2,500 of the EV vans to the delivery giant, hence the FedEx livery on the record-setting van. BrightDrops claims a total of 25,000 reservations, and the Zevo 600 is currently being produced. The van can haul 2,200 lbs of stuff in a 600 cubic-foot cargo area. A smaller van, the Zevo 400, is coming late next year.