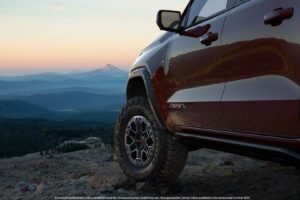 The GMC Canyon AT4X will be an even more rugged version of the brand’s midsized pickup. We are now seeing the first teaser for the meaner model ahead of a full debut this summer.

The teaser image only lets us see the lower side of the Canyon AT4X. Compared to the standard AT4, this one has additional cladding around the wheel wells and rides on 17-inch beadlock-capable wheels. It looks like the suspension might sit a bit taller, too.

A spy video offered a look at what was likely the Canyon AT4X testing. It appeared to have a revised front bumper to provide an improved approach angle. The development team kept the rear suspension concealed. Speculation suggested the truck had Multimatic’s DSSV spool-valve dampers – a feature already on the Chevrolet Colorado ZR2.

The powertrain for the Canyon AT4X remains a mystery. There’s a rumor that it could be the L3B 2.7-liter turbocharged four-cylinder making 325 horsepower (242 kilowatts) and 380 pound-feet (515 Newton-meters) of torque. There allegedly wouldn’t be a diesel engine choice. We have no info about the transmission choices at this time.

The Canyon AT4X would allegedly only be available in a single body style. Buyers would only be able to get it with a crew cab layout.

The AT4X trim debuted on the 2022 GMC Sierra. On the larger truck, the rugged model has mechanical upgrades like a revised suspension that increases wheel travel, Multimatic’s DSSV spool-valve dampers, locking differentials for both axles, a larger transfer case shield, and a Terrain driving mode that allows for one-pedal control when in 4-Low. The interior is fairly luxurious with amenities like 16-way power seats with massage functionality. A Bose stereo is standard, and there’s Vanta ash wood trim.

There’s also a rumor of GMC introducing an AT4X grade of the Sierra HD pickup. It would follow a similar recipe of receiving parts to make the truck more capable off-road. This reportedly includes an updated suspension, locking differentials, bigger skid plates, and revised bumpers for better clearance.