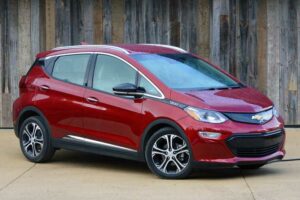 GM says these precautions aim to minimize the risk of fire on some 50,000 Chevrolet Bolt EVs it already recalled in November.

It may seem like an overcautious thing to do—GM itself says it is doing this “out of an abundance of caution”—but the fact of the matter is that more fires would do incomparably more damage to the Bolt’s reputation than the automaker acknowledging a problem with the EV it hasn’t been able to solve yet.

General Motors has been notified of two recent Chevrolet Bolt EV fire incidents in vehicles that were remedied as part of the safety recall announced in November 2020. Out of an abundance of caution, we are asking owners of 2017-2019 Chevrolet Bolt EVs who were part of the recall population to park their vehicles outdoors immediately after charging and not leave their vehicles charging overnight while we investigate these incidents.

Customers who have not had the remedy completed should still visit their dealer for the recall remedy while our investigation continues.  At GM, safety is our highest priority, and we are moving as quickly as we can to investigate this issue.  Customers should visit https://my.chevrolet.com/recalls or contact the Chevrolet EV Concierge 1-833-EVCHEVY or their preferred Chevrolet EV dealer.

It’s worth noting that the Bolt EVs in question have already been recalled in November last year for fire risks. Two of the recent fires happened in vehicles that were part of that recall, which is a pretty clear indication that the GM fix did not work.

As a reminder, GM issued the November recall after NHTSA opened an investigation in October into five reported Bolt fires resulting in two minor injuries. The recall mentioned the potential of an unattended fire in the high-voltage battery pack underneath the backseat’s bottom cushion. The recalled Bolt EVs are equipped with batteries produced at LG Chem’s Ochang, South Korea facility.

In April 2021, GM also issued a software update and said dealers would use “diagnostic tools to identify potential battery anomalies and replace battery module assemblies as necessary.” The automaker added that it would make the diagnostic software standard in the 2022 Bolt EV and 2022 Bolt EUV, and would offer it for all other Bolt EVs on the road at a later date.

Speaking of the facelifted Bolt and its crossover companion, this new development certainly won’t help their case as they roll into US dealerships this summer.