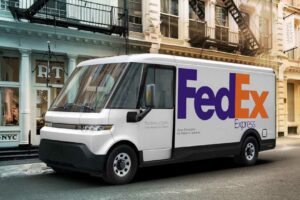 General Motors has built its first electric commercial delivery vehicles through its newly created BrightDrop division. The BrightDrop EV600 is now in production to start filling an order for FedEx Express, which wants the electric vans in its fleet to help with holiday season demand for parcel delivery.

GM also has revealed an addition to the lineup: the EV410 which is a medium-sized electric commercial vehicle designed to make smaller, more frequent trips such as online grocery deliveries. The BrightDrop EV410 will have the same range of about 250 miles from a single charge but a smaller footprint so it is easier to maneuver and fits in a regular parking spot, BrightDrop president and chief executive officer Travis Katz said. The name EV410 refers roughly to its 410 cubic feet of space in the cargo hold.

Verizon will be the first customer for the smaller electric vans. Verizon will add the BrightDrop EV410 to its field maintenance and service fleet. GM is not saying how many vehicles in total have been ordered.

From Concept to Production

While BrightDrop is a brand within GM, it operates more like a technology startup, which is how it was able to get its first product to market so quickly, Katz said. GM says the EV600 is the fastest vehicle it has ever taken from concept to production. It was developed in 20 months. Traditional vehicles take about 50 months to bring to life.

The BrightDrop EV600 uses GM’s latest electric vehicle platform and Ultium battery system, the ones also used in the 2022 GMC Hummer EV electric pickup truck and SUV, and a raft of other future EVs from GM. The purpose-built vehicles will directly compete with the large electric vans that Rivian is making for Amazon Prime.

In an innovative move, BrightDrop used a supplier in Michigan to start low-volume production of the EV600 to meet the deadline of getting the first of the 500 promised vans into FedEx’s hands by the end of the year. The move also allowed GM to work out bugs early in the production process.

Ultimately the vans will be mass-produced at GM’s CAMI plant in Ingersoll, Ontario. The tooling will be moved to the Canadian plant and reinstalled for production to begin in November 2022.

EV410 production will begin at the CAMI plant in 2023. Pricing has not been released yet. It has a shorter wheelbase of about 150 inches and the whole van is just under 20 feet long.

BrightDrop is a new venture that was announced in January as a brand designed to provide last-mile delivery of goods and services. In addition to a growing number of commercial delivery vans, the division has developed the EP1, an electric pallet that looks like a tall electric suitcase and replaces a dolly. The EP1 rolling cabinet gets parcels from the warehouse to the van and from the van to the lobby. A pilot project in Toronto found the EP1 could deliver 25 percent more packages per day. BrightDrop is bullish on it as a driver of growth and is working to get it commercially ready as quickly as possible, Katz said. BrightDrop also has a software platform for fleet and asset management.

Future BrightDrop vans could have smaller batteries. BrightDrop started with a large battery that provides 250 miles of range, even though most routes average 100-150 miles, because the brand wanted to provide customers with an abundance of range and confidence, regardless of route, weather, or driving conditions.

Vehicles in the commercial space have crossed the tipping point where economics favor EVs over delivery trucks with internal combustion engines, Katz said. Fleet owners are more focused on the total cost of ownership, down to the penny, and EVs are radically less expensive over their lifetime.

Katz said the average fleet owner will save at least $7,000 per vehicle per year with the BrightDrop EV600 versus a traditional diesel-powered van—and that math was done a year ago when diesel fuel was less expensive than today. As a result, Katz thinks fleets will convert to EVs faster than other segments.