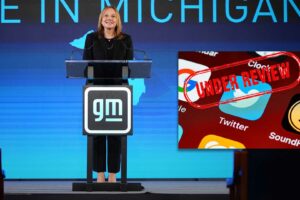 Probably the biggest automotive headline recently doesn’t directly involve cars, but rather a surprising takeover of Twitter by Elon Musk. Musk is now the “Chief Twit” following the completion of the acquisition on October 27. The Tesla CEO immediately fired top Twitter executives including CEO Parag Agrawal after the acquisition.

As Twitter is one of the social media platforms where automotive companies advertise, a reaction from Tesla’s competitors was in order after the said corporate movement.

General Motors was the first to pull the trigger, CNBC reports.

According to the report, the Detroit automaker has announced that it is temporarily pausing its paid advertising on Twitter. It is currently evaluating Twitter’s direction under the new management, GM told CNBC. The company’s interaction with its customers will continue, though.

Much like the rest of the world, GM has already started its push for electrification, with Tesla standing as a stark rival in the segment.

Following the takeover, Musk released a statement directed at Twitter’s advertiser to clarify the speculations behind the move.

I didn’t do it because it would be easy. I didn’t do it to make more money. I did it to try to help humanity, whom I love. And I do so with humility, recognizing that failure in pursuing this goal, despite our best efforts, is a very real possibility.

Musk has announced that the social media platform will have a “content moderation council with widely diverse viewpoints.” Musk confirms that he hasn’t made any changes to the platform’s content moderation policies as of this writing.