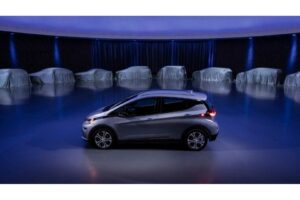 According to a recent report on Reuters, which was republished via Autoblog, General Motors has plans to launch 10 new electric cars in South Korea by 2025. However, per GM’s international operations chief Steven Kiefer, the company doesn’t currently have specific plans to produce EVs in South Korea.

Just last year, GM shared that there were concerns with investing in South Korea, and building EVs there wouldn’t be an option over the shorter term. Instead, GM produces its EVs in the US and China, with plans to also manufacture electric cars in Canada and Mexico going forward. Kiefer recently told the media via Autoblog:

“We are not announcing any plans yet to produce electric vehicles in the country, so stay tuned for that.”

The image above has been floating around for years now. It was one of the earlier photos as GM was outlining its all-out assault on the EV segment. While the automaker continues to up its commitment and investments related to future EVs, it isn’t selling many (if any) at the moment.

Unfortunately for GM, the whole Bolt EV and Bolt EUV recall situation has been a thorn in its side. However, as GM and LG fix the problem, it could provide renewed faith from EV shoppers that the automaker is committed to a future of electric cars, and it’s had time to work out all the bugs. Moreover, GM CEO Mary Barra is actually driving a recalled Chevy Bolt EV as her daily driver.

GM already produces some 600,000 cars per year in South Korea. However, the company is losing money building cars in the country. Reuters reported that GM lost some $262 million from its South Korean operations in 2020.

That said, GM has a strong relationship with South Korean battery supplier LG Energy Solution, which could work in its favor as plans in the country ramp up. Kiefer added:

“Clearly more (battery) capacity is going to be required, so stay tuned for some additional announcements.”