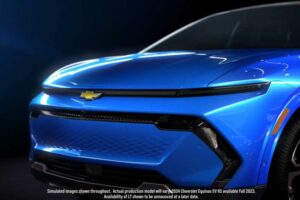 GM and Honda have deepened their partnership to develop electric vehicle, with “millions” of affordable crossover SUVs to go on sale as early as 2027, the automakers said in a joint press conference on Tuesday.

“By working together, we’ll put people all over the world into EVs faster than either company could achieve on its own,” GM CEO Mary Barra said in a statement released before the press conference.

The companies will develop a new global architecture based on GM’s next-gen Ultium battery technology, focused around cutting costs.

Each automaker deems the mass production of affordable electric vehicles for the global market crucial in reaching stated goals of carbon neutrality by 2040 for GM, and 2050 for Honda. The expanded partnership plays on existing strengths within each company to minimize costs, improve performance, and increase sustainability, according to statements.

“Honda and GM will build on our successful technology collaboration to help achieve a dramatic expansion in the sales of electric vehicles,” Honda president and CEO Toshihiro Mibe said in a statement.

The existing partnership dates back nearly a decade to 2013, when the two automakers began collaborating on hydrogen fuel-cell technology. By 2018, Honda had agreed to buy battery modules for electric vehicles from GM, who had established the technology with the Chevy Bolt. In 2020, Honda committed to using GM’s Ultium battery technology to underpin its first two electric vehicles built in North America at GM factories and planned for 2024, including the Honda Prologue electric crossover and an unspecified Acura model.

The companies are specifically targeting the compact crossover segment, currently the most popular segment by volume in North America. GM went so far as to target an entry-level electric crossover costing less than the 2024 Chevy Equinox EV and its alleged $30,000 starting price.

“Our plans include a new all-electric product for North America positioned at a price point lower than the upcoming Chevrolet Equinox EV, building on the 2 million units of EV capacity the company plans to install by the end of 2025,” Doug Parks, GM executive vice president, said in a statement.