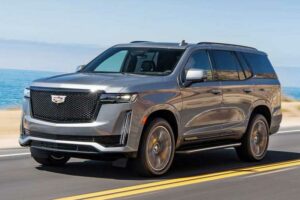 Cadillac intends on launching an all-electric version of their flagship Escalade SUV in 2025, however what they will call it remains unknown. As it will be sold alongside the gas version currently available, a name to distinguish it as the fully electric version is expected.

Interestingly, GM also filed for protection of the names in European nations such as the UK and Austria indicating that their EVs could be available over there. Currently Cadillac has minimal presence in Europe with only 20 dealers and one model offered – the XT4.

Cadillac will be an all-electric brand by 2030 and intends to build a range of electric vehicles on their Ultium platform which can support a range of battery options between 50 kWh and 200 kWh in size. The V8-powered Escalade currently on sale starts at $76,295 and offers class-leading autonomy and comfort. Expect the all-electric version to go toe-to-toe with the Rivian R1S, GMC Hummer EV and Tesla Model X in what is a rather uncrowded segment – full-sized electric SUVs.