GM Concludes After Years Of Mistakes, Full Lineup Of EVs Is Key 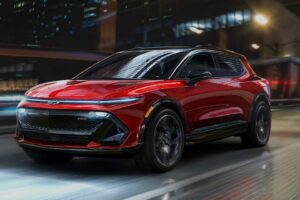 General Motors is now fully committed to a future of electric cars in all classes, shapes, and sizes. The automaker now suggests that producing and selling an entire lineup of EVs that will eventually be on sale at the same time will work to promote sales. GM believes that the upcoming “full portfolio” plan will play out much better than its individual efforts in the past.

When it comes to EVs, GM was an early adopter, producing and selling the EV1 toward the end of the 1990s. The company went on to offer the Chevrolet Volt in 2010 and the Chevrolet Bolt EV in 2016. Sadly, the EV1 program was canceled since the automaker couldn’t make a profit, and most of the cars were crushed. The Volt and Bolt EV have seen decent sales, but nothing for GM to be overly excited about.

According to Automotive News, GM President Mark Reuss spoke this week in Nashville, Tennessee, at the Automotive News Congress. He admitted that GM was tentative about EVs in the past, though he also said that the company has learned a great deal from its previous electric car efforts.

Reuss noted that selling a single electric car with no other electrified models in the lineup made for a difficult situation. More specifically, he said it was hard to market and promote the solitary model’s benefits while also selling an entire lineup of gas-powered vehicles. Reuss admitted:

“The company, at that time when we launched the original Bolt, was afraid and didn’t really get behind it. We would have liked to have had a portfolio of electric vehicles to go to market with. It’s hard to put one car in market and have anybody get behind it in a sales network.”

In the past, we provided multiple reports of various automakers seemingly working to “anti-sell” their electrified options. Some well-known CEOs even advised consumers not to buy EVs, and there were very few advertisements or commercials. Meanwhile, many automotive manufacturers were pushing back against stricter fuel economy and emissions requirements. Reuss added:

“We made our own mistakes, and now we are pretty focused on what the right formula is. We’ll take that and really go at it.”

Today, with many auto companies producing and selling multiple EVs, we’re seeing growing support for the segment, complete with Super Bowl commercials and the like. Meanwhile, GM has said time and time again that it will launch a whole host of EVs by 2025, and it aims to surpass Tesla as the EV leader around that time. By 2035, GM hopes to have a fully electric portfolio of vehicles. GM CEO Mary Barra recently shared in an interview:

“We’re taking all the steps to do it. We have said that by mid-decade, we will be selling more EVs in this country than anyone else, including Tesla.”

Aside from the Chevrolet Bolt EV and Bolt EUV, GM’s first new electric vehicles include the pricey GMC Hummer EV electric pickup truck and Cadillac Lyriq electric crossover. However, a Chevrolet Silverado EV and a fully electric Equinox are in the works, among many other options. All GM’s future EVs will be purpose-built vehicles riding on the automaker’s Ultium global platform.

Along with the Equinox EV, GM plans to bring several electric cars to market with starting prices of around $30,000. During a recent interview, CEO Barra also said:

“Remember, we’re not necessarily just selling at the premium end. We’re going to have electric vehicles affordable at $30,000.”