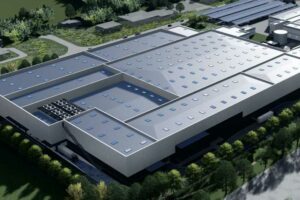 The plan is to start with 8 GWh annually, and then expand to 24 GWh.

Construction of the plant is scheduled to start in 2023, while the production should begin in 2025. The plant is expected to have manufacturing capacity of 8 GWh annually, which will be expanded to 24 GWh annually later this decade.

Once completed, the plant is expected to supply enough battery cells for up to 500,000 electric cars annually.

Comparing the manufacturing output with the scale of incentives looks heavily subsidized, just to support the German Opel brand (part of Stellantis) and create up to 2,000 jobs.

The second Automotive Cells Company – a similar 8/24 GWh gigafactory – will be built in France, probably a year later.

In total, Automotive Cells Company intends to invest some €5 billion in the two plants, but €1.3 billion is expected to come from the European Union.

The lithium-ion technology will be provided by Total’s subsidiary Saft, which currently is building a €200 million pilot plant at its Nersac facility.

In the broader picture, ACC will be only one of many battery suppliers for Stellantis, as the company already has contracts with CATL, BYD, SVOLT, Samsung SDI and LG Chem’s LG Energy Solution.

We guess that depending on the competitiveness of the in-house battery production, Stellantis will decide whether to expand ACC or continue to rely on external suppliers.