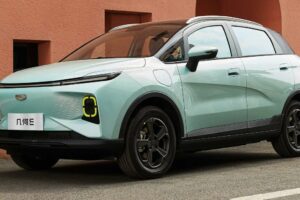 Geely’s electric vehicle spinoff Geometry has revealed the first full photos of the E (previously named the X Thunder Tiger), a small zero-emission crossover based on the Geely Vision X3. If that’s a familiar recipe, that’s because it’s exactly the same one used for making the adorably-named EX3 Kungfu Cow, which was just revealed in September.

In fact, the E sits within millimetres in terms of size, at 4,006 mm long (+1 mm), 1,765 mm wide (+5 mm) and 1,550 mm tall (-25 mm); its 2,485 mm wheelbase is also just five millimetres longer. This makes things a little complicated, because the E sports a comprehensive makeover inside and out, so it stands to reason it will sit higher up in the marketplace compared to the EX3.

However, it apparently has less power than its closely-related sibling – and that car wasn’t exactly bursting with performance. If the information provided by China’s Ministry of Industry and Information Technology (as reported by several portals, including Sina), the E produces just 60 kW (82 PS) from its single electric motor. 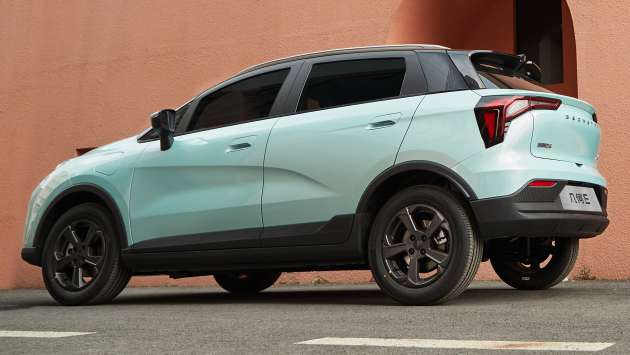 But it’s the E that sports the more modern design, ditching most of the Vision X3-derived body panels. In its place sits a minimalist design that appears to borrow some inspiration from the Xpeng P7, with a full-width LED strip up top and main headlamps mounted lower down the bumper, surrounded by lime green frames. The bumper also gets a pincer-like design and a neat tessellated graphic on either side. The E also gets a straighter window line than the EX3 and Vision X3, ditching the dipped beltline and adding new wing mirrors that sit on the door body. The shoulder line also has a downward kink towards the rear (like the Geometry C), while the door handles sit flush with the body. Unlike the EX3, the charging port of which sits where the grille would normally be, the E’s is on the front left fender.

At the back, you’ll find a unique linear pattern on the C-pillars, funky boomerang-shaped taillights and a large tailgate spoiler with a protruding vertical third brake light. The interior is an even bigger departure from the EX3, sporting a clean horizontal dashboard with a Mercedes-Benz-style widescreen display panel, equipped with twin 10.25-inch instrument and infotainment screens. Other unique features include pill-shaped air vents, body-coloured trim panels and a floating centre console with the EX3’s rotary gear selector.