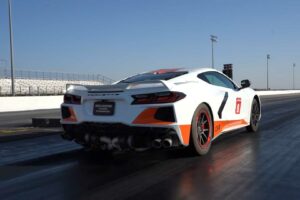 Emelia Hartford’s 2020 C8 Corvette is one fast machine, and we’re certain anyone can appreciate the capabilities it displays. On her most recent YouTube video, Emelia is invited by General Motors to check out the all new 2024 fully-electric Hummer SUV. She accepts the invitation and decides to take her street-legal, record-breaking C8 to show it off to GM. So, what did GM think of her C8?

If you don’t know about this C8, let us give you a quick introduction. YouTube star Emelia Hartford and her team decided to take a mid-engine C8 Corvette and transform into a quarter-mile monster. And yes, we’re talking about the Corvette that’s supposed to be non-tunable. They added a twin-turbo setup along with a separate, standalone Holley ECU and other goodies to take this Corvette to new heights. Emelia and crew wanted the fastest C8 and they sure got that. The C8 recorded 1,022 horsepower and 942 lb-ft of torque at the wheels. Now, that’s a powerful ‘Vette, but did it prove itself at the quarter mile?

Their ultimate goal was to shatter the quarter-mile record of 9.95 seconds set by a boosted C8 built by Extreme Turbo Systems. Their journey to a record-breaking time was strenuous, but at the end of it all they attained an astonishing time of 9.36 seconds at 147 miles per hour. Today, this C8, dubbed Phoenix, is an internet sensation with so much to boast about. Emelia even received an offer of $180,000 for her C8.

So, did General Motors like the C8? Of course. Emelia and the C8 received nothing but praise from GM. “We love what you are doing,” were some of the words of acclamation received by Emelia. It only makes sense to see such an outstanding build get the thumbs up it deserves.