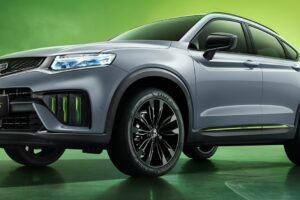 Handsome as it is, the Geely Xingyue lives in the shadow of its newer, bigger and more practical L sibling. To shine a little bit of spotlight back on its coupé-esque SUV, Geely is introducing a new variant called the Xingyue S, which adds a number of aesthetic flourishes.

Unlike the Emgrand S, the Xingyue S is not a facelift, so it retains the same good looks of the regular variant. There is a new grille, however, which replaces the “expanding cosmos” concentric rings with a black mesh. Beyond that, the changes mostly deal with colour and trim, with specific references to the car’s Compact Modular Architecture (CMA) co-developed with Volvo.

The platform’s abbreviation can be found everywhere on the S, from the exterior side mouldings to the seat embroidery. These, like many other design cues on this car, are highlighted in lime green, contrasting against the grey paint and black interior.

Elsewhere, you’ll find triple lime “thunderbolt claw” slats on the front corner air inlets and a gloss black finish for the door mirror caps, roof, quad tailpipes and 20-inch alloy wheels. Inside, the black Nappa leather and suede upholstery has been decorated with lime stitching and a “triangular matrix” pattern, while the dashboard trim gets a linear line pattern and the CMA script. Lime seat belts also feature.

No other details have been released just yet, but it’s been reported that the Xingyue S will be powered exclusively by a 2.0 litre turbocharged petrol engine. In the regular Xingyue, the mill makes 238 PS and 350 Nm of torque and is paired to an eight-speed Aisin automatic gearbox and either front- or all-wheel drive. A lower-output 190 PS/300 Nm version is also expected.