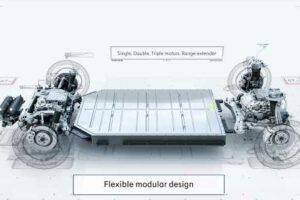 When Zhejiang Geely Holding Group (Geely Holding) unveiled its Sustainable Experience Architecture (SEA) last year, one of the key innovations touted is the longevity of the battery that will be used in electric vehicles based on said platform.

According to the company, the battery has been tested to be able to retain its range without any degradation for at least 200,000 km. At its highest energy capacity of 110 kWh, the modular CTP (cell to pack) integrated battery offers 700 km of range, which is more than enough to quell range anxiety.

The battery pack can power electric motors with power outputs of up to 475 kW (646 PS or 637 hp), and with a two-speed transmission, 8,000 Nm of wheel torque. The latter is not the actual torque generated by the electric motor, but the amount after the gear ratio and/or final drive ratio are factored in. A larger figure is nice from a marketing standpoint, as demonstrated by GMC Hummer EV and its 15,592 Nm.

Besides commendable range and outputs, the SEA also supports an 800-volt electrical architecture that allows for DC fast charging, which can see 120 km of range being recovered in just five minutes of charging. Geely Holding tops things off by claiming the battery has a lifespan of 2,000,000 km under NEDC operating conditions, which is certainly overkill for most consumers. However, the SEA was also developed with commercial vehicles in mind, so a battery that can last for a high mileage is certainly a benefit.

All of the above sounds promising for sure, but can the battery deliver on its promises in our country of Malaysia, where the climate ranges from warm to blazing hot (with a sprinkle of rain every now and then) throughout the year? To find out, paultan.org posed that question to Kent Bovellan, the chief engineer for the SEA architecture at Geely Auto Group, during a recent group interview.

“From the data I have, that promise is right. No degradation starts until you reach 200,000 km and that’s for many people a normal lifetime. It can go to two million km before it reaches 80% [battery health]. That’s just the facts I have, but I’m not an expert in battery technology. It’s the facts we got from the battery supplier and teams working with batteries, so that’s the figures I have,” said Bovellan. He explained that the platform employs an efficient cooling system to ensure that the cells in the battery do not exceed the threshold of 45 degrees Celsius, which is where degradation begins to take place. Of course, degradation can occur naturally and fast charging can accelerate the process, similar to what a smartphone has to go through.

“If you don’t go over the [target] temperature, you don’t have degradation. You have to have an efficient cooling system, which is well tested in the SEA for warm climate like Malaysia. Of course, in warmer climates, you will need more energy, because we have to use the AC system to cool the battery to keep it below 45 degrees Celsius, so we don’t get the degradation,” Bovellan added.

So, if and when Geely’s SEA-based vehicles do make their way into Malaysia in some shape or form, rest assured that the battery can stand up to the heat. We don’t know when such EVs will arrive here, although Proton, one of Geely’s partners, has said in the past that it is ready to introduce EVs when the time is right.