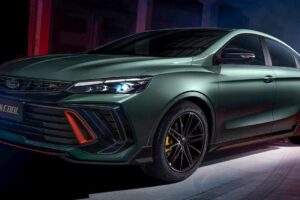 Geely has revealed the new Binrui Cool, which is a sporty-looking sedan built on the carmaker’s B-Segment Modular Architecture (BMA) platform also used by its more conservative sibling, the Binrui. Reportedly set to go on sale in China in the second quarter of this year, the Binrui Cool is aimed at a more youthful and fashionable audience, with starting price of around 79,800 yuan (RM52,776).

The design philosophy for the new model is called “Racing Storm,” and as you can see, Geely was aiming for maximum aggression. At the front, the convoluted bumper has no shortage of slats and faux vents that emphasise the vehicle’s width, accompanied by a bonnet that bears five prominent creases.

Meanwhile, the slim upper grille is flanked by sharp headlamps that have a triple-dash daytime running light signature like the latest Emgrand. You’ll also notice the grille has an “F” badge on it, and that’s because the Binrui Cool is a sportier version of the Binrui F Sport, according to CarNewsChina. 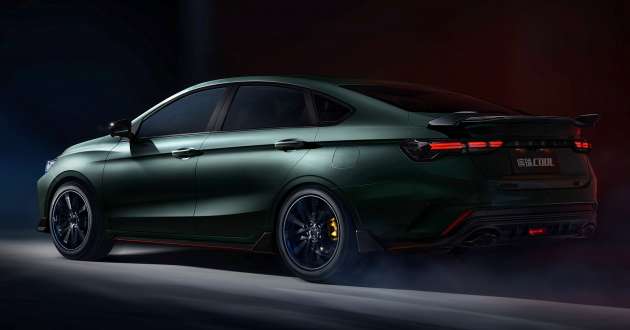 Along the sides is where the resemblance to the Binrui, with notable cues being the swooping roofline crease lines over the front wheels and through the door handles leading to the rear taillights. Brightly painted brake calipers and finned side skirts are another reminder that this is the cooler Binrui, as do the 17-inch black wheels in a dual-star spoke pattern.

To complement the striking front end, the rear gets a big spoiler, while further down, there are corner outlets and dual oval-shaped exhausts that sandwich a diffuser-like element. Unlike the normal Binrui, the Cool’s taillights have been reshaped and come with a dual-bar lighting signature the is bridged by a trim piece with the Geely script.

However, the interior of the Binrui Cool is unique from its less sporty sibling with a simple horizontal dashboard headlined by a 10.25-inch digital instrument cluster and a massive 12.3-inch infotainment touchscreen. The cabin is designed to be driver-focused, as evident by the higher border on the centre console on the passenger side, while all the controls are placed for easy reach by the driver. 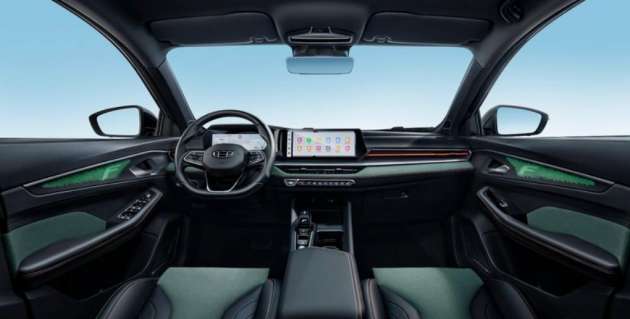 Sports seats and more defined grip areas on the steering wheel are reminder of this, while the “F” logos near the door handles and gear lever hint at the step up from the Binrui F Sport. A mix of black polyurethane, leather and faux suede materials are also used, with orange contrast stitching on certain surfaces.