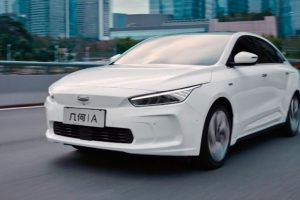 Geometry, the brand for fully electric vehicles within the Geely group, has announced that the A Pro will join its line-up on April 1, 2021 with uprated specifications for its drive motor and battery.

This will build upon the specification of the Geometry A that was unveiled in April 2019 with a 161 hp/250 Nm permanent synchronous magnet motor, fed by a ternary lithium battery in capacities of 51.9 kWh and 61.9 kWh, offering range of between 410 km and 500 km on the European NEDC cycle. The Geometry A does a claimed 8.8 seconds in the 0-100 km/h sprint.

Enter the Geometry A Pro that is set for debut next month, which will pack 201 hp and 310 Nm of torque from its uprated drive motor. This will be paired with an upgraded battery as well, which Geely has described as “updated to reach 183.23Wh per kg” to increase its range to 600 km on the NEDC test cycle. At its unveiling in 2019, the first Geometry A was quoted to have an energy consumption figure of 13.5 kWh per 100 km which translated to a cost-per-distance figure of 0.07 yuan (4.3 sen) per kilometre at the time. The Geometry A cam equipped with a system that enabled charging from 30% to 80% in just 30 minutes, while a Super E Energy Station setup enabled the supply of power to external equipment such as laptops.

Powertrain specification is likely to comprise much of what defines the Geometry A Pro, and with the Geometry A used as a base, the interior of the A Pro is likely to be very similar. Inside, the fully electric sedan employs a 12.3-inch central screen while the driver gets a simplified, floating screen mounted atop the steering column.

The cabin of the Geometry A meet’s OEKO-TEX Standard 100 environmental protection standard of Europe, making it safe even for newborn babies, said Geely. The eco-friendly fabrics are said to be waterproof, antifouling and breathable, and are also claimed to prevent the seats from rapidly warming or cooling away from ambient temperature.

GALLERY: Geometry A in Singapore, 2019