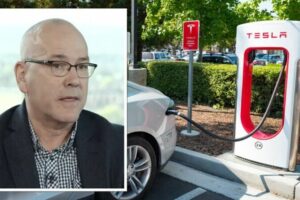 The Tesla Model Y and Model 3 were the two best selling cars in the UK in March, selling almost 13,000 models combined. Author Ken McLaughlin spoke to the GB News panel about the record electric car sales for Tesla’s.

He said: “It’s rather surprising to me actually, but for the first time ever, Tesla’s are the first and second spot for new car sales.

“It shows that at some level, we’re embracing the green strategy and electric cars.”

However, Mr McLaughlin spoke of his personal experience with electric cars, telling of his wife’s misfortune.

He continued, saying: “You should have had my wife on for this segment though.

“She bought a new car six months ago and the electric battery broke after a few months.

“I’m sure she would give you a different story than what the newspapers have given.

“It does show that contrary to many people’s beliefs, there is a drive and an embracement for the new technology.”

He did not reveal what model the electric vehicle was.

March was the best ever month for battery electric vehicles with 78.7 percent growth to 39,315 units.

All electrified vehicles account for one in three registrations.

Steve Tigar, CEO of loveelectric.cars, said the results were positive and called on the UK to keep it going.

“The 78.7 percent year-on-year increase in EV sales proves drivers really are embracing the government message to switch to electric.