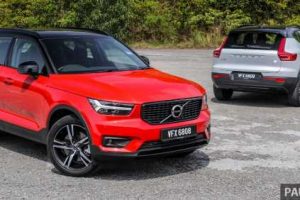 Here is a full gallery of the Volvo XC40 Recharge T5 R-Design, which was launched in Malaysia just last month. The new plug-in hybrid variant joins the existing, non-PHEV XC40 T5 AWD R-Design, and is priced at RM241,997 on-the-road without insurance.

The sum factors in the ongoing sales tax relief, which is 100%, as the XC40, like the entire Volvo line-up here, is locally assembled (CKD) in Shah Alam. It should be noted that the non-PHEV variant is now cheaper, dropping down to RM231,651.

Powertrain-wise, the Recharge T5 consists of a 1.5 litre turbocharged three-cylinder petrol engine that makes 180 PS (178 hp) and 265 Nm of torque. An electric motor is sandwiched between the engine and a seven-speed wet dual-clutch transmission, with drive going only to the front wheels. By comparison, the non-PHEV variant packs a 2.0 litre turbocharged four-cylinder engine with 252 PS (249 hp) and 350 Nm, along with an eight-speed automatic transmission and all-wheel drive. The top speed is the same here, but it’s quicker in a century sprint, requiring just 6.4 seconds.

The XC40 PHEV’s 10.7-kWh lithium-ion battery makes up the bulk of the weight, allowing for a pure electric driving range of up to 44 km. The battery is mounted in the drivetrain tunnel, so there’s no compromise to boot space, which remains unchanged at 460 litres, although the fuel tank is slightly less at 49 litres instead of the non-PHEV’s 54 litres.

To recharge the battery, users can rely on an onboard AC charger (max 3.7 kW limit) and a Type 2 connector cable. With a regular three-pin domestic socket (2.3 kW), it takes five hours to reach a full charge, while by using a charging station capable of supplying the full 3.7 kW that the car can take, that time is reduced to three hours.

The XC40 Recharge T5 R-Design shares nearly the same equipment with the XC40 T5 AWD R-Design, including the aforementioned styling package. This includes a gloss black grille with pin-like inserts, along with window and bumper trims finished in black. Buyers will get five colours to choose from – Crystal White Pearl, Bursting Blue Metallic, Black Stone, Coral Red Metallic and Glacier Silver Metallic – all with a black roof and side mirror caps. The factory warranty is five years/unlimited mileage, while the warranty on the PHEV battery is eight years/160,000 km.