Home » Car Reviews » G81 BMW M3 Touring is the fastest wagon to lap the Nürburgring with an official time of 7:35.06 minutes – paultan.org

G81 BMW M3 Touring is the fastest wagon to lap the Nürburgring with an official time of 7:35.06 minutes – paultan.org 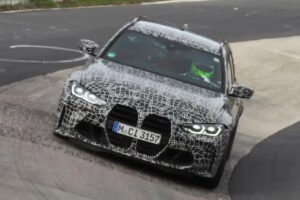 To build up even more hype for the first-ever BMW M3 Touring, the German carmaker recently announced that its upcoming model is the fastest production wagon to ever lap the Nürburgring with a time of 7:35.06 minutes around the longer 20.832-km layout of the circuit.

This was revealed in a video posted on YouTube that documented the G81 M3 Touring’s record attempt, where we get to see BMW engineers prepping the car and a short clip of the driver getting a little airborne on “The Green Hell.”

The vehicle used for the attempt is still dressed in the same camouflage we’ve seen before and was inspected by TUV Rheinland before BMW M driving dynamics developer and racing driver Jörg Weidinger got behind the wheel.

Against another fast German wagon, the M3 Touring beats the Mercedes-AMG C 63 S Estate, which put up a time of 7:45.19 minutes, with the time being set by German publication Sport Auto during a track test in 2021.

The M3 Touring is expected to use the same powertrain found in the current G80 M3 Competition xDrive, which consists of an S58 3.0 litre twin-turbo straight-six petrol engine delivering 510 PS (503 hp) and 650 Nm, along with an eight-speed automatic transmission and all-wheel drive. It’ll also get the same face and other M-specific touches, albeit applied on the body of a G21 3 Series Touring.

BMW has confirmed the debut of the M3 Touring will take place during the Goodwood Festival of Speed on June 23, where the wagon will also participate in the hill climb at the event. We’ve waited since August 2020 for a wagon version of the M3, so what’s another few days, right?