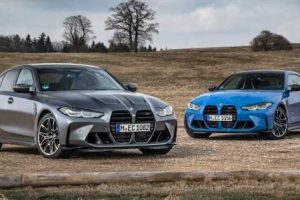 Following the debut of the G80 BMW M3 and G82 M4 last September, the German carmaker has now revealed the all-wheel drive variants of the performance models, the first time either has received such a system. Set to go on sale from July this year, the all-paw duo will only come in Competition spec and with an automatic gearbox.

The M xDrive system features an electronically controlled multi-plate clutch in its transfer case to distribute torque between both axles, and is primarily rear-biased by default until more grip is needed at the front.

Things like the driveshafts and output shafts are unique to the all-wheel drive variants, including the transfer case that has a control unit and integrated wheel slip limitation. This allows the system to compensate for any differences in rotational speed between the front and rear wheels quickly without having to involve the central Dynamic Stability Control (DSC) management.

Joining the M xDrive system is an Active M Differential, which ensures fully variable distribution of torque between the rear wheels, and the entire setup is linked to the cars’ DSC system.

Just like the current F90 M5, drivers will be able to set up the all-wheel drive system depending on their preference, with three modes available. The default 4WD setting is for maximum traction while maintaining a distinctly rear-biased power split at all times.

Switching to 4WD Sport makes the setup even more rear-biased for dynamic driving situations like executing controlled drifts. For those with a lot of bravery and talent, they can switch off the DSC system completely and engage 2WD model, where only the rear wheels are driven. If the optional M Traction Control is fitted, traction can be finely adjusted through ten stages in this setting in the same way as on the rear-wheel-drive models.

These modes can be stored as part of the two individual M1 and M2 configurations, along with settings for engine characteristics, damper response, steering characteristics, braking system and other parameters.

A staggered wheel setup is also standard here, with M light-alloy forged wheels measuring 19 inches at the front (with 275/35 tyres) and 20 inches at the rear (with 285/30 tyres). Track-focused tyres with the same dimensions are also available as an option.

With the introduction of the M xDrive-equipped M3 and M4, both model ranges now have a combined six variants available. The other options include base models with a six-speed manual transmission and 480 PS (473 hp) and 550 Nm at their disposal, along with the aforementioned rear-wheel drive models with the more powerful S58 and an automatic gearbox (this is what we get here). A convertible version of the M4 will further expand the range later this year.