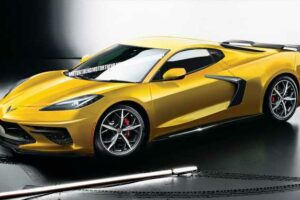 WHAT IT IS: The eighth-generation Chevrolet Corvette won our 2020 MotorTrend Car of the Year award, but it’s just the starting point. Chevy Performance is gearing up to roll out five high-performance variants of the C8, and a new Z06 will be the first to arrive. Expect about 625 horses from its 5.5-liter naturally aspirated flat-plane-crank V-8 that ought to redline at 9,000 rpm. With its aggressive aero and sticky tires, the Z06 will surely pack some serious Ferrari 458 Speciale vibes.

The Z06 will be followed by a new ZR1, which will likely bolt two turbochargers to the Z06’s powerplant and subsequently pump out about 850 hp. Around the same time, expect to see a gasoline-electric hybrid Corvette, which will be the first production all-wheel-drive version of the model in its history. The rear wheels will be powered by the C8’s 6.2-liter V-8 (or possibly something with a couple of fewer cylinders) and an electric motor. The front wheels will each get an electric motor. Plug-in capability is likely. Those same two electric motors will be joined by a powerful third motor powering the rear axle on the electric Corvette E-Ray. Finally comes the Zora, a 1,000-plus-hp PHEV hypercar that mates the Corvette Hybrid’s electric motors to the ZR1’s monster engine. The exotic car world is hereby put on notice.

WHY IT MATTERS: Although the latest Corvette captured our COTY honors, it placed fifth out of seven at our 2020 Best Driver’s Car competition. Chevy needs high-performance variants to keep up with and even beat the likes of Porsche, Lamborghini, Ferrari, and McLaren. We know what Chevy Performance is capable of, and when world-class power and handling are combined with the Corvette’s relatively low price, the results ought to be world beating.

PLATFORM AND POWERTRAINS: There’s a lot of room for more plumbing in the C8’s engine bay. Likewise, filling up the frunk space with batteries and motors makes packaging sense. We also know the 5.5-liter flat-plane V-8 in the C8.R race car was developed with more than just endurance racing in mind. Although a production engine would lose the 500-hp restrictor plate, it’s unclear what measures will be required to meet durability standards with such a large flat-plane V-8.

EXPECTED ON-SALE DATE: Early 2022 makes sense for the Z06. The Hybrid will probably appear toward the end of 2022, followed by the ZR1 and the E-Ray in 2023. The Zora should appear by 2024, about halfway through the C8’s lifespan.