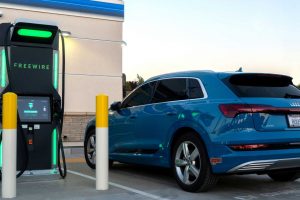 A Firewire Boost Charger, a flexible solution for fast charging where power is the limit.

FreeWire Technologies, backed by BP Ventures and ABB Technology Ventures, has just deployed its first (and U.S. first) battery-integrated ultra-fast charger. It was installed at an ampm fuel and convenience store in Lodi, California (along two major highway thoroughfares in California’s Central Valley).

The FreeWire Boost Charger is a 120 kW dual-head (CCS/CHAdeMO) charger with integrated 160 kWh battery, which allows to install it flexibly with just low-power input (like 20 kW single-phase).

In many cases, it allows to significantly lower the installation cost and time, as well as avoid demand tariffs for peak power connected from the grid.

As the ampm is part of bp America, while FreeWire is backed by BP Ventures, we guess that soon more Boost Chargers might be installed at other stores in the network (ampm has over 1,000 stores in five states).

FreeWire actually confirmed that expects to expand to additional locations this year and throughout 2021.

“Fueling stations and convenience stores have had very few options to provide EV charging until now. With Boost Charger, EV drivers can get 100 miles of range in 10 minutes, and businesses can drive more revenue from new visitors to their store – all at a dramatically lower cost.”

Most EVs were charged individually, but at some point, two cars were charged simultaneously – one using CHAdeMO, and the second one CCS1 plug. While sharing power between two vehicles, the maximum power per vehicle is 60 kW.