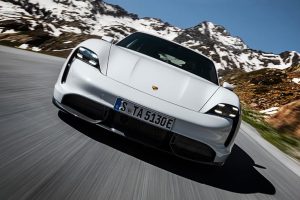 Buyers of early Taycan EVs are being offered free software upgrades, improving the car’s infotainment an sharpening up acceleration

Porsche is offering a free software upgrade for early Taycan EVs, to bring performance and efficiency up to the level of current cars. The upgrade includes tweaks to the adaptive suspension where fitted, the charging system, Porsche’s Communication Management tech, and online features.

For example, an optimised chassis control system has improved the technology’s ability to control wheelspin, which means in the Tacyan Turbo S’s case the original car’s 9.8-second 0-124mph time has been improved by two tenths of a second, according to Porsche.

The brand has also added a new Smartlift function to models with adaptive air suspension. This can be programmed so that the car is raised automatically when it reaches certain spots on a journey, including sleeping policemen or steep driveways.

Meanwhile, when you’re charging your Taycan on route, the Charging Planner can now use your sat-nav destination to work out when the battery has enough charge to reach it without having to stop again.

The Taycan also has a new Battery-Saving Charging mode, which reduces the rate at which the battery is charged (from 270kW down to 200kW in some situations), and so keeps its temperature down to protect its longevity. A 22kW AC charger can also be retro-fitted in some markets from the end of this year.

Porsche has updated the car’s satellite-navigation set-up, so that online information can now be displayed on the map. Owners can also use their Apple ID in the Taycan, allowing them to listen to Apple Podcasts and use the Apple Music Lyrics functions. If you’d prefer to use your smartphone’s connectivity for the infotainment, Apple CarPlay is now available wirelessly, too.

The upgrade to Porsche’s first EV “includes significant software optimisation for numerous control units, which means the transmission has to be adapted and the drive components calibrated when the work is completed.” As a result, Taycan owners will have to book a free appointment at their local dealer to get the technology tweaks, with the work carried out on site.

Do you like the idea of getting free software upgrades after you've bought a new car? Join the debate in the comments…