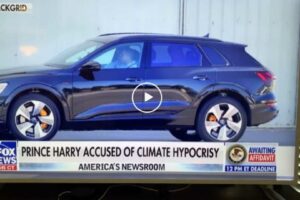 Fox News was at it yet again, publishing hearsay as facts in an attempt to call yet another celebrity or world leader a hypocrite. The publication went after Prince Harry – who is known for talking about climate change on a regular basis – for waiting a significant amount of time to board an idling jet while sitting “idling in gas-guzzling SUV.”

Fox News has developed a reputation for going after various politicians, world leaders, and celebrities based on topics related to green energy, global warming, climate change, and the like. As you’ll see in the short video clip embedded above, “American’s Newsroom” makes a notable reporting error.

Keep in mind that while being the nation’s most highly rated news station, Fox News has admitted multiple times in court that it’s not actually a news channel, and that some of its reporters are merely entertaining. At any rate, the reporter in the video accuses Prince Harry of driving a gas-guzzler when the man is actually sitting in his fully electric Audi e-tron SUV, which actually doesn’t idle, and has no tailpipe emissions.

The primary reason Fox News is bringing attention to Prince Harry’s travels in a polluting jet, as well as his “gas-guzzling SUV,” is that he has made his opinions about climate change clear. Harry advocates for clean energy, so if he was sitting in an idling SUV that was spewing out harmful exhaust fumes, the channel would be right to call him out, especially since he should have no problem affording any new EV instead of a gas-guzzler.

As far as the private jet is concerned, there are currently no fully electric alternatives. Even Tesla CEO Elon Musk has been called out on a regular basis for all his jet travels. We believe celebrities and leaders like Musk, Prince Harry, and even President Joe Biden should obviously work to limit their travels in polluting vehicles, especially as they advocate for green energy. However, it would be quite an epic feat for a world leader, company CEO, or celebrity to live life in a manner that’s completely emissions-free.

Fox News later corrected its mistake, noting that Price Harry was behind the wheel of an electric SUV. However, the publication added that some of Harry’s staff were using gas cars, and brought the focus back to the private jet plane, which is extremely inefficient and causes significant pollution.