Former Ferrari Designer Weighs In On The Purosangue 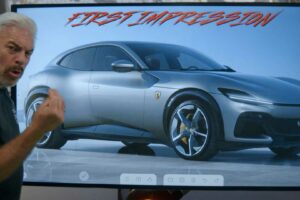 In the realm of automotive design, no one beats Frank Stephenson – at least in terms of having things to say about other peoples’ works. His design critiques on his YouTube channel provide some valuable insight about new cars, enough for us (and probably some of you) to hit the Subscribe button and follow the man.

Stephenson’s latest design analysis is close to his heart. The former Ferrari design boss, who penned the F430 and the FXX, weighs in on the automaker’s latest model, the Purosangue.

And as the Purosangue is Ferrari’s first foray into the SUV segment, despite the automaker refusing to call it so, you can expect Stephenson to say a few things about its styling.

Stephenson’s design critique of the Purosangue starts with praise. He thinks the Ferrari thoroughbred is beautiful and maintains the essence of Ferrari cars. Further compliments come out of Stephenson’s mouth, including words like sensual, dynamic, curvaceous, and sexy. But then again, a Stephenson critique video isn’t one without him pointing out things that he thought would improve the overall design.

Up front, he thinks that the running lamp signature could be better. The sides get most of Stephenson’s attention, particularly with the shut line of the clamshell hood, front door handles, and carbon fiber fenders. He also thinks that the black accent at the bottom of the A-pillar is unnecessary.

At the back, the primary criticism falls on the taillights, which he thinks should be round for that Ferrari identity. Then again, he admitted that some things have to evolve in order to move forward.

For this video, Stephenson also offered some insights on the Purosangue’s interior styling. He loves the driver-focused approach without forgetting the passenger area, as well as the Manettino, which he first designed for Ferrari. However, he thinks that Ferrari cars are becoming too electronic these days; in his words “the more electronic, the less Ferrari.”

Overall, it’s still a quite positive Purosangue design review coming from the former Ferrari designer. The video atop this page is quite long but trust us, it will be worth your time.