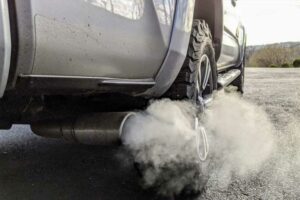 Posted on EVANNEX on August 14, 2021 by Charles Morris

Margo Oge is a clean-car crusader. As the Director of the EPA’s Office of Transportation and Air Quality, Ms. Oge led the team that authored the 2010-2025 Light-Duty Vehicle Greenhouse Gas Emissions Standards, and described the process in her 2016 book, Driving the Future.

She also owns a Tesla, and she believes that the company’s innovations have had even more impact than government standards on cleaning up the world’s transportation system.

That said, there’s no question that federal emissions regulations have been instrumental in encouraging (or coercing) automakers to produce EVs, and to make their legacy vehicles cleaner.

Since President Nixon signed the Clean Air Act in 1963, federal regulations aimed at reducing air pollution have gradually grown stronger. Under President Obama, the EPA set the first federal greenhouse gas standard for cars. The Trump administration attempted to throw this process into reverse by watering down the federal standards. President Biden’s administration has now proposed to return to a policy of gradually improving fuel economy standards. However, this can’t be done with the stroke of a pen—government rule-making is a long and complex procedure, to say the least.

In a recent interview with Charged, Ms. Oge explained the process of developing federal emissions and fuel economy standards.

Charged: The body of federal and state air pollution regulations encompasses both emissions and fuel economy standards, and generates an astounding number of acronyms. Can you parse the alphabet soup for us?

Margo Oge: Let’s see if we can simplify it, because you are absolutely right—it’s pretty complicated. [I’ll give you] a little bit of the history. The Clean Air Act allows the EPA to address pollutants coming out of the tailpipe of a car. The traditional pollutants [are] nitrogen oxides, volatile organics, and particulates. So, the EPA traditionally has used the Clean Air Act to reduce emissions from the transportation sector.

A petition came to EPA in the early 2000s, asking the agency to reduce greenhouse gas emissions from cars. California, at the same time, was moving to establish their own greenhouse gas standards. The case went all the way to the Supreme Court, and in 2007, the Supreme Court basically said that greenhouse gases are pollutants, and if they endanger public health and the environment, [the EPA can] regulate them.

So that was the basis for the EPA, under President Obama in 2009, setting the first federal greenhouse gas standard for cars. EPA then worked with the state of California and NHTSA, which sets fuel economy standards—in the mid-1970s, President Ford established the law that NHTSA is using to improve fuel economy, and the basis was not climate change, but energy security.

So, the three agencies came together: NHTSA for fuel economy, EPA for greenhouse gases and [CARB in California], and tried to put together a national program. One of the greenhouse gas pollutants is CO2, and when you improve fuel economy, you also reduce CO2. So that’s the loose relationship between the two, but regulating CO2 doesn’t do anything for the other greenhouse gases that EPA regulates [fluorinated gases, methane and nitrous oxide].

Charged: So, the EPA regulates emissions of pollutants. What about the Corporate Average Fuel Economy (CAFE) standards?

Margo Oge: NHTSA [the National Highway Traffic Safety Administration] sets those under EPCA [the Energy Policy and Conservation Act, enacted in 1975 in response to the 1973 oil crisis]. That’s where the CAFE standards originate.

We used our existing laws to set standards that were complementary. So, for a car company, if you follow EPA standards, you would be meeting NHTSA standards as well.

Under President Obama, we set the first set of standards [for model years] 2012 to 2016, and the second set for 2017 to 2025. EPA said, we’re going to do a midterm review that will potentially affect 2021 forward, and when Obama left office, the agency did the midterm review, and concluded that the standards can be met by the car companies, no changes needed to be made for 2021 to 2025.

President Trump came to office and decided, because the car companies asked him to, that the standards cannot be met. “It will cost millions of jobs.” So instead of [mandating] 5% annual improvement from 2021, they decided to roll back the standards to 1.5% annual improvement, which is what the industry meets, regardless of if there is a standard or not. So in reality, President Trump killed the standards for 2021 to 2025. And the other thing he did was to take regulatory steps to take away the authority from the state of California to set their own more stringent standards.

Now President Biden has done two things: He said to the agencies, EPA and NHTSA, “By April, you need to restore the California authority.” California legally should be able to do its own standards under the Clean Air Act. They have done it for 50 years.

[Since this interview took place, the Biden administration has also announced its proposal for a new set of clean-car standards. As Ms. Oge and other experts predicted, the administration’s proposed standards are roughly equivalent to those that prevailed under President Obama. Basically, the federal fuel economy standards will revert to the status quo of four years ago.]

Margo Oge: In my view, the most important work will be what happens after 2025, after you fix the impact of the wrong decisions under the Trump administration that have put the country behind Europe. Europe is ahead of even the Obama standards.

And look at what’s happening with all the car companies, all the investments that they’re making. You have companies like Volvo and GM saying, “We have an aspirational target—all new sales for vehicles are going to be a hundred percent electric in 2035.” You have the state of California [saying that] all new sales should be electric in 2035. You have 13 states that follow California that will adopt the same program. So, in my view, the work that is going on right now is very important, but the more important work will be beyond 2025. How does President Biden set the future standards that could impact 2030, and maybe beyond that?

Charged: Once the agencies announce their decision about what standards we’re going to have now, will there be legal challenges?

Margo Oge: Yeah. The agencies will make proposals, but legally, they cannot have final action. So, they’re going to allow some time for public comments, maybe 60 days, and then the agencies will finalize their action, maybe by the end of the year or the beginning of the following year. And yes, there could be legal actions. The Department of Justice under Biden has put a hold on all the legal challenges that came from 22 states, the NGO community and others challenging Trump’s standards, and the Biden administration has decided that they’re going to defend their own standards.

Above: Margo Oge looks back and discusses what she did to implement soot-free emission standards (YouTube: CleanTransport)

In my view, if President Trump had made it for a second term, they would have lost the legal challenge under both the Clean Air Act and EPCA, because the standards were not set on a legal economic basis. President Trump’s agencies came up with a lot of fictitious and fictional science. If you’re adopting a standard that [calls for] 1.5% annual improvement, when the industry historically has improved fuel economy about 2% annually, well you’re not pushing the envelope, you’re not doing anything.

I’m very confident that whatever Biden is going to come up with will be on much stronger legal footing. There could be challenges—a car company can say they’re too strong, but…legally, [automakers] are going to have a very difficult time to challenge those standards.

The Clean Air Act is a technology-forcing standard, so basically the technologies are there, and it’s cost-effective, we know that from our analysis under the Obama administration. And I think the data is even stronger now, given all the new technology. I think it will be impossible for the car companies to succeed [in challenging the new standards]. I think the biggest problem that they may have is that the environmental community will say it’s not stringent enough, given what we know today.

Charged: Let’s look beyond 2025 or so, to when the real action may get started. What might we see the federal government doing in that timeframe? And when will we find out about that?

Margo Oge: I have [had] some discussions—they’re confidential so I’m not going to disclose anything, but I’m very hopeful that the administration is going to be ambitious, because of what President Biden has already indicated. He cares a lot about climate change, but also cares a lot about jobs. He has announced that he’s going to create a million new jobs for the automotive industry. He talks a lot about domestic manufacturing. He talks about 500,000 charging stations. I cannot say [exactly] what they’re going to do, but I’m very optimistic that we’re going to see a transition to electrification because of climate change.

We’re seeing it in China, we’re seeing it in Europe. Given the fact that the cost of an electric vehicle and the similar model of a gasoline or diesel will be the same even earlier than 2024, I think we’re going to see the Biden administration be ambitious. But let’s not forget, that’s going to take a big transition, so it has to be done very carefully, very thoughtfully. I think that the laws are in place to do standards, but President Biden needs to do new legislation for infrastructure, negotiate budgets to create support for the car companies…there’s a lot of things that need to happen. It’s beyond setting standards—standards have to be set along with economic policies.

Charged: Would you agree that the influence of Tesla has been even greater than the government standards?

Margo Oge: Yes, yes. And you could quote me on that. I strongly believe that. I drive a Tesla. It is just an amazing car. What this man has done, single-handed…he’s going to go down in the history books. Forget about standards policies, he has forced every major manufacturer to rethink their products.

State regulations also play a vital role in cleaning up our air, and they interact with federal standards in complex ways. For more insights about the future of fuel economy and emissions rules, read the Charged interview with California environmental lawyer Maureen Gorsen.

This is an updated version of an article that originally appeared in Charged. Author: Charles Morris.