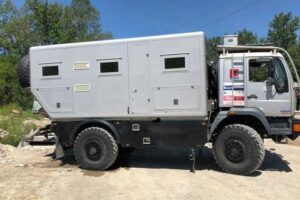 The Dakar Rally is one of the greatest and most extreme off-road rallies that the world has witnessed. So much so that the vehicles used in these races already have reputations that precede them.

In fact, one of the service trucks used in Dakar in the 2000s has found a new life after retirement. After nine years as a service truck for the rally teams KTM and Orlen in Paris-Dakar (among others), it’s now available as an off-road camper rental in The Netherlands. If you have doubts about what this motorhome can do, its résumé should give you an idea.

Having had the experience through extremes, this Dakar Rally veteran should be able to go anywhere should you wish to rent it (except snowy destinations, apparently). It was converted into an expedition camper in 2011 by a company dedicated to making those things.

But beyond its esteemed off-roading capabilities, the RV is also equipped with conveniences and comfort one could want in a motorhome. It seats six and sleeps four. It also comes with solar panels, batteries, 79.2 gallons (300 liters) of water, fixed and convertible beds, a shower, toilet, a three-burner stove, two refrigerators, and two diesel tanks. The owner even throws in a barbecue set, an outdoor table, and outdoor chairs to go with your camping trips.

According to the listing, travel distance is unlimited if you want to rent this off-road RV. Unfortunately, the insurance policy’s coverage is limited to Europe. The minimum reservation period is seven days, with flexible hand-in and retrieval locations.

The rental rate isn’t listed on Camptoo, but if you want to see more photos of this one-of-a-kind Dakar Rally motorhome, you may visit the source link below. You may also drop some inquiries to the owner if you’re really interested.