Ford's Pre-Christmas EV Tweetstorm Is A Weird Menagerie Of Memes 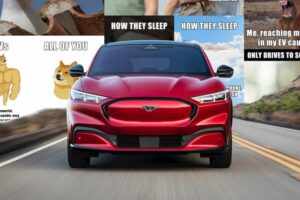 As we roll through the final week of 2021, now is a good time to revisit something a bit weird that happened shortly before Christmas. In this instance, the weirdness comes from Ford through social media, specifically Twitter. By now, we’re all familiar with internet memes and the hilarity they can sometimes communicate. However, we don’t typically see them from automakers, never mind a full-on blitz of passive-aggressive messages.

That’s exactly what happened on December 21, as Ford’s Twitter account sent out no less than nine memes in support of electric vehicles. By support, we basically mean taking common arguments against EVs and belittling them to some degree. Admittedly, some are quite clever, such as the donkey pointing out that, without an engine sound, amateur in-car karaoke can reach an entirely new level.

Unfortunately, it’s offset by several cringe-worthy attempts to undermine legitimate arguments like range anxiety. That is, unless Ford assumes people only drive locally to work and school for their entire lives.

And then there are EV tweets that are just bizarre, like the cat wearing sunglasses that isn’t worried about getting to work despite forgetting to plug in the car the night before.

Mind you, this tweet comes after another tweet making fun of people worried about forgetting to plug in their EV the night before. Yeah, that’s awkward.

There’s no question that Ford is keen to establish itself as a leader in the EV realm. The Mustang Mach-E has thus far proven to be a success, and with the new F-150 Lightning racking up nearly 200,000 reservations, Ford is doing everything it can to ramp up production efforts. Whether this wave of pro-EV memes is a precursor to a new PR effort is unknown, but we reached out to Ford in hopes of gaining a bit more insight into this curious campaign.

However, judging from the plethora of negative responses to the tweets, we aren’t sure the messages will persuade anyone to go all-electric that wasn’t already planning to do so.